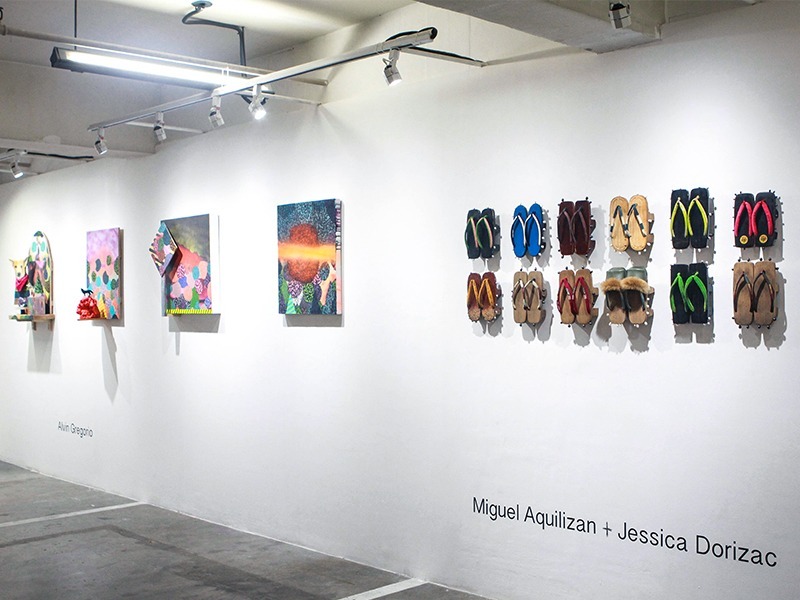 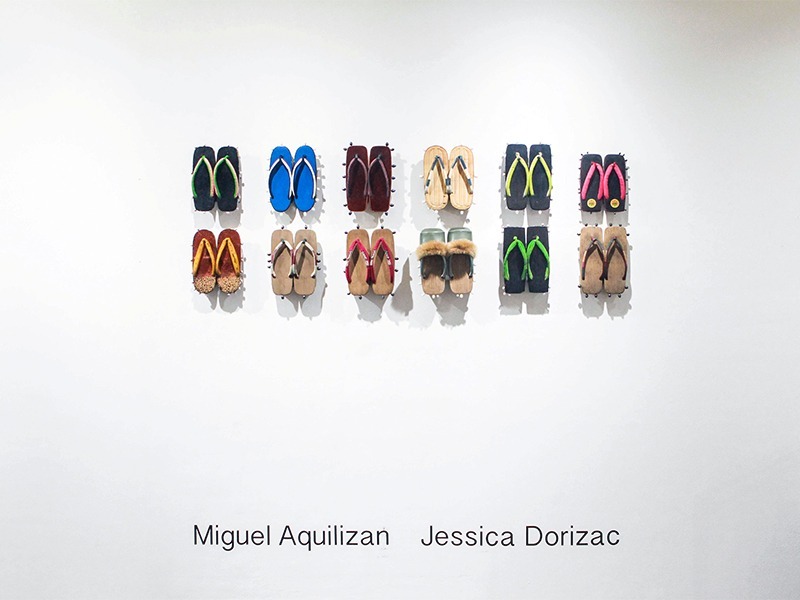 Collecting objects plays a big part of our lives. It brings us joy and satisfaction finding beautiful things either old or new.
The sculptures are the product of our obsession. As we bind, pierce and sew, the object starts to have a life of its own. Combining designer shoes with Japanese ceramics while obliterated with Swarovski crystals and black or white pearls, it creates a narrative about the culture and society which it came from, where it now is and the various functions it has played.
Drawing from traditional patterns found in the textiles of Philippine tribes, the use of reflective tape aims to bring an awareness and caution to the sculpture contained inside.

Juan Miguel Aquilizan (b. 1986. Manila, Philippines) currently lives and works in Brisbane, Australia. Sculpture was his main track in the University of the Philippines Diliman. Works heavily with Objects Assemblages exploring ideas of Cultural identity, consumerist culture and the post migration generation. His practice has received recognitions in the University, the Philippine Art Awards and the Metrobank Foundation through the course of his studies in Manila.
Jessica Rae Dorizac Aquilizan (b. 1993. Brisbane, Australia) currently lives and works in Brisbane, Queensland, Australia. Studied fine art at Queensland University of Technology Creative Industries majoring in Visual Arts. She works with various media including Painting, Sculpture, Objects and Installation. Born of a Filipino mother and a New Zealand father, her practice explores the concepts of living spaces, domestic culture, the post migration generation and cultural identity.
Drawing on their shared Filipino lineage, Jessica and Miguel have been creating together since 2016.

Alvin Pagdanganan Gregorio (b.1974, Los Angeles, CA, U.S.A.) is a child of Filipino immigrants and the grandson of a Filipino Guerrilla sniper. His work primarily investigates issues of transgenerational violence (stemming from his Lolo’s trauma from WWII), post-nomadism, complex PTSD, globalism, post-religion, mortality and rewilding, He had his first exhibition with The Drawing Room Gallery in 2001, shortly after earning an MFA from Claremont Graduate University(Los Angeles). His work has been exhibited and collected internationally, including the Rockefeller Family Collection (Sotheby’s, 2002). His collaboration with M12, investigating sheep wagons, was featured at the 2012 13th International Venice Architectural Biennale, Spontaneous Interventions. Gregorio is a Fulbright Scholar (Philippines 2000-01), recipient of a U.S. Speaker and Specialist grant (Israel/Palestine 2007) and is currently an Associate Professor of Arts Practices-Painting at the University of Colorado Boulder. He currently lives and works between Boulder/Denver, Colorado and Los Angeles, California.