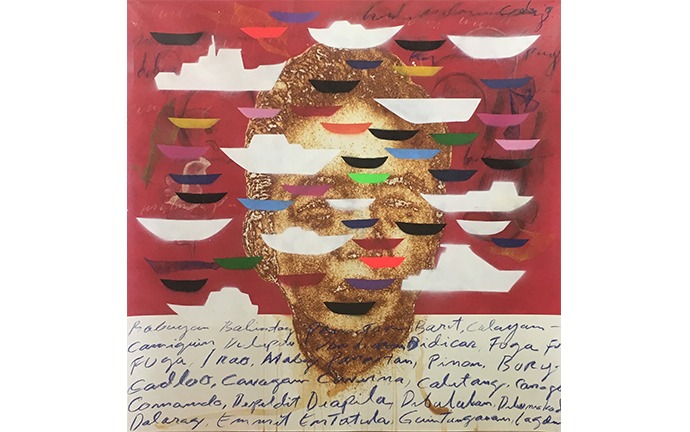 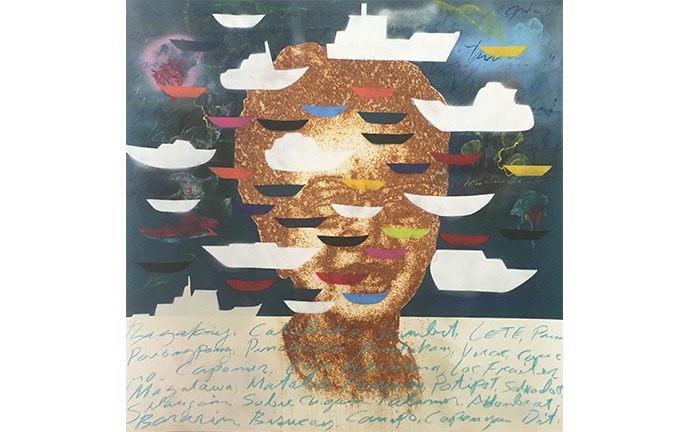 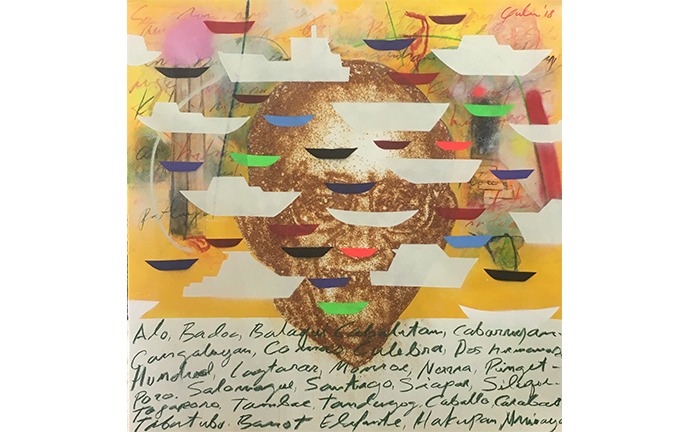 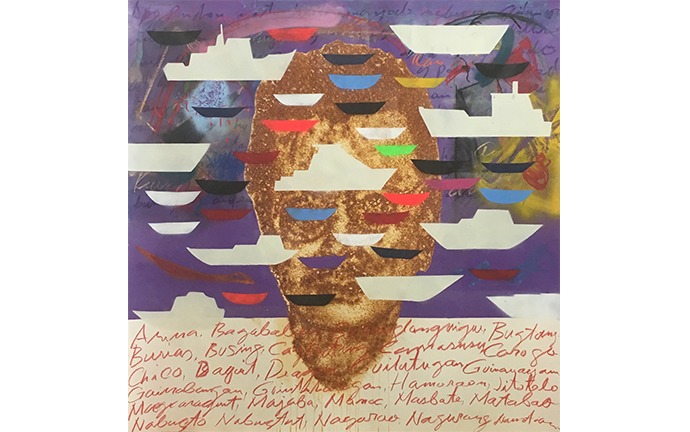 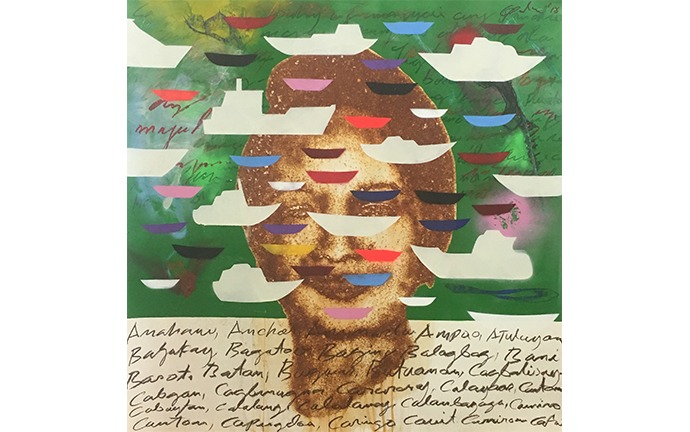 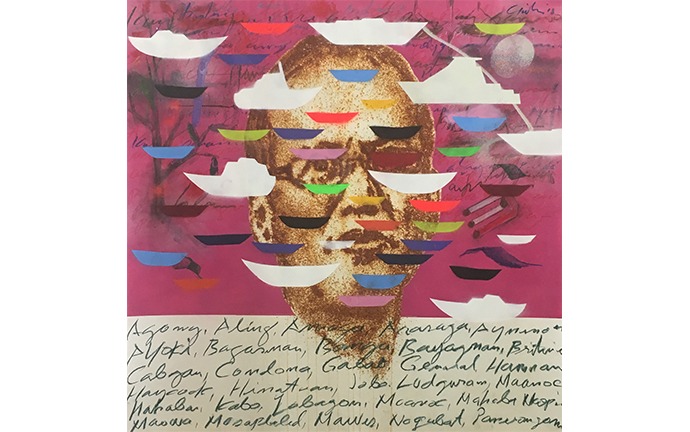 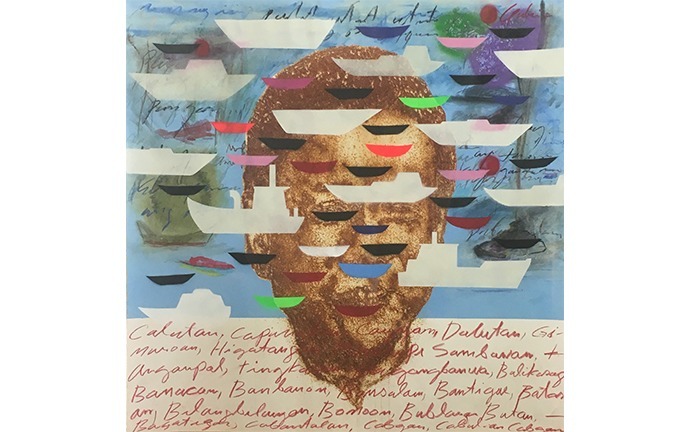 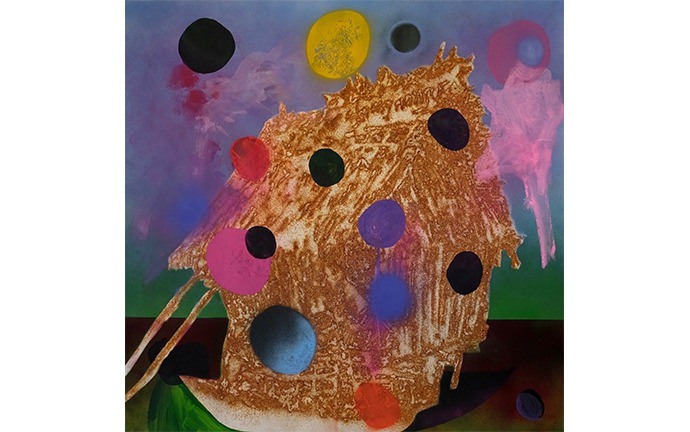 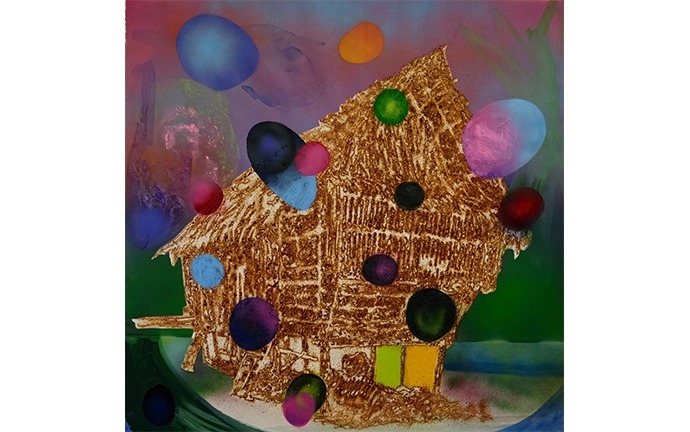 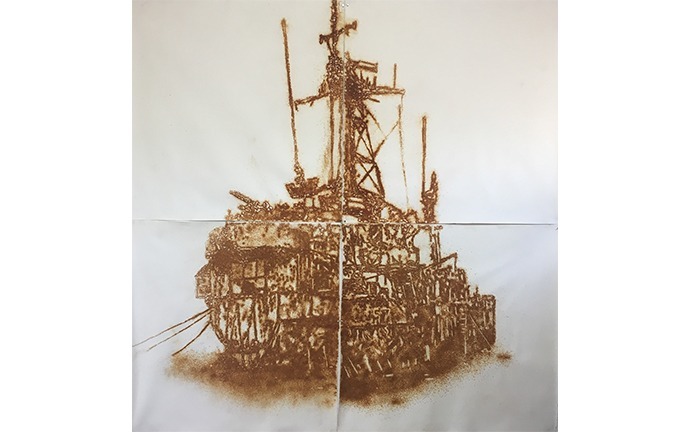 Diokno Pasilan is a contemporary Filipino painter and musician, who lives, works and exhibits in the Philippines and Australia. As such he faces a constant concern that his work might fall between two stools, slip between the cracks and so be found wanting in one way or another.

The exceptionalism of western art, both modern and ‘postmodern’ has long presented a difficulty for non-western artists. Whatever their chosen idiom it becomes a thematic and technical straight jacket, always referencing somewhere other than here and now, never revelatory. This is specially so for those whose cultures have long existed at very close quarters with the ruinous west. The challenge is to engage, to encompass the experience of the west without losing all sense of time or place.

Pasilan’s solution has been to find ways to use the gaps, the interstices as connective tissue to allow both forms and meanings to circulate through his work, to ebb and flow, without any frozen negation.

His large multi-paneled image PH outpost is derived from the familiar sight of a stranded wreck of a naval vessel at low tide. It has long awaited salvage while gently rusting into the world around it. Like all romantic ruins it has the presence of a monument on the border. Memories and emotions circulate through its corroding cells and girders scuttling around like soft shelled crabs, while the time and tide flow through them at the water line.

Grandiose wrecks and ruins always invoke the strangeness of past humanity. So do humbler wrecks like PH outpost consider the ladder like shape on its right hand side. Almost anything will do. J. G. Ballard was able to the rubbish and ruined concrete of Eniwetok into an outpost as a monument to nuclear war.

Pasilan made the image of PH outpost by placing metal filings on the heavy dampened paper. Once they are removed there remains an imprint of rusty oxides, slowly branded into the paper to produce fateful shadows of red oxide, made through time, through which almost anything might circulate, any culture, any community as happens at all outposts. He employs this unique process in all the works in this show.  It always promotes a sense of the provisional the opposite of the decisive brush stroke.

One of a major series of images of the Filipino house, the  Barangay is also titled Outpost  A drawing of a traditional house made in rusty iron oxide seems to exist at the borderline of the culture it represents. Such houses have an open structure, with spaces that encourage community and communal life. They are loosely put together so that air can pass through them a metaphor for forms and ideas.

A modulated crimson/ carmine  field surrounds the house. Groups of softly sprayed overlapping roundels lie flat across the surface of painting apparently in front of the house. Occasionally as on the right hand side of this painting they appear to be circulating through its very fabric, The Barangay is certainly an outpost perhaps on the very edge of being abandoned.

In this way western modes can circulate or get stuck in the cracks. Between the cracks things can get lost, hostages to time and memory without bringing the house down or indeed sinking the ship.

That happens in all these paintings. Pasilan uses the motif, a western artifact from Monet’s haystacks to Warhol’s silk screens, to emphasise something else, the house as something organic but enduring, the public portrait of authority as far more than an emblem or a token of the cult of personality. They become a  complex product of culture through time.

Another painting Daydream presents the image of the house with only a flat but intense lilac tinted pink background like the flash of a nuclear detonation surrounding it. The obdurate existence of the house acquires extraordinary intensity. Sometimes, as in Southern Cross  Pasilan uses larger diameter soft or hard roundels with marks or lines stretched into their surface, set dark subtle shadows  against a deep blue stormy night setting.

In his early experiments with imagery made with iron filings, Pasilan drew Made In China from a mass produced small white glazed ceramic bust of Mao Zedong in his family home, a revolutionary house hold god./ emperor portrait He then covered it with multi-coloured polka dots of various sizes. Made In China is something of parody of the way Beijing’s contemporary artists (and Warhol) appropriated Mao’s mage for their post-modern Pop.

In the eight works in the Waterline series, however Pasilan has moved on from the pre-emptive nihilism of Pop to a far more poetic open ended, contemplative,  idea of the public portrait and its presumed omni-presence. These seven heads of Filipino leaders and one American Donald Trump are a cross, between happy snaps, and the formality of portraits on postage stamps. They also have an antiquated bust-like quality, the plain presence of an ancient specimen in a dusty corner.

Each head almost hangs in front of a complicated variously coloured background almost like a painting by Paul Klee. White silhouettes of all kinds of boats float across the image of each head as though it was below them, floating under the waterline.  Under them at the bottom of each image is a panel of the handwritten names of some the hundreds of Philippine islands. Marcos, Aquino, Ramos and co all fit this very well. But, what of Trump? This is the American President as he appears in a non-western context, another one like the other one unable to pre-empt power even in the imagination.

Pasilan is also showing a more conventional series of portrait heads a grid of etchings titled Seniors ID. They are based on some identity photos that he made to help out his neighbours on Palawan where he has a house. They are an excellent foil for Waterline. Here also is the reference to Warhol’s quick fire pattern of silkscreened, passport snaps. These heads, however, are etched, slowly put together, stroke-by-stroke, photography mediated by memory. If anything they seem far more monumental in their documentary detail, than the flimsy, mega-visual presences of the leaders in Waterline.

By allowing modes of image making deeply engaged with the exceptionalism of western art to circulate around the shadow of a house, a non western presence or to float threateningly on the Filipino waterline, Pasilan has opened up the meaning of their making to any significance he wishes emphasise. These paintings offer far more than the right-minded graphic decoration, which fills so many Asian art galleries. They resonate with delight and destiny.