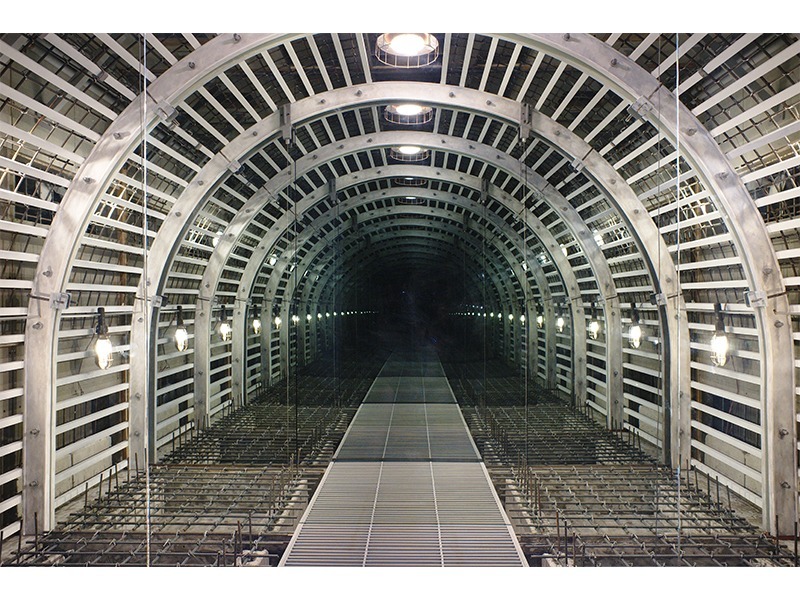 Mark Justiniani
Mark Justiniani (b. 1966. Bacolod, Philippines), often identified with the lineage of Social Realism through the 80’s and 90’s in the Philippines through artist-activist initiatives like Salingpusa (1984) and Sanggawa (1994), have been working with notions of how we perceive reality. After returning from the USA in 2006, he has developed his oeuvre through “magic realist strains” and has moved to configurations of space, the nature of vision and their ever vacillating relationship with time through the use of reflective media in recent years. His practice has had him represent the Philippines in conferences and exhibitions in overseas since 1992.

In the history of colours, blue is a latecomer on the index of identification and usage. Not until the Egyptians mined lapis lazuli did “blue” achieve a name that was lacking in prehistory, and even in classical Greek tradition. Scientifically, our vision interprets blue in the electromagnetic radiation that has av wavelength between 450-495 nanometers. That is why the sky is often not blue, but the saturation of the semi-precious lapis lazuli is banked on the property of trisulfur radical anion. The gash of blue that makes the cosmic terrain in “00000 (Trench)”, on the other hand, is generated by an alchemy of creasing, cutting, alignment of both luminary and dichroic film. Pigment wasn’t processed, but the dichroic film is a prism that refracts light and stamps our sight with the spectral coordinate of blue.

Formally, light has become a device to reinforce elements of a work. How, then, does one make it a subject-object? Derek Tumala uses light, and wrestles with the arbitrary principle of optics. As material for the work, the calculations in achieving solidity to refractions prone to mutability become experimentations with abstractions. But that is the art bit of all the projects struggling to free the flat image. Tumala’s journey into the physicality of art is witnessed through his marriage of the three-dimensional object with the moving image, setting multiple variables whose singularity could not exist without the other. However, his interest is that of totality – one that surpasses the question of where one thing begins and another ends.

The new series Appetite for Wonder departs from an inquiry into the experience of space and time – ultimately, what is the position of our existence founded first on the sensorial dimension and moves on to speculate, then calculate, how that works. It proceeds to uncover landscape beyond either as a construct or as imagined-to-arrive; it looks at how one sees the object; as it fathoms the meta beyond the meta-, there was a refraction, there is (a) light –  light whose source is untraceable: are you, as subject emitting it simultaneously as you receive it?

The Rainbow Gravity theory posits the analogy of a prism cleaving white light into a rainbow. Colors are actually different wavelengths we see, and the theory proceeds to speculate that “different energies will actually see different space-times, different gravitational fields.” Rainbow Gravity is one theory that sprung from the attempt to bridge discrepancies between general relativity and quantum mechanics, and further vetoes the singular density of “origin” positioned by the Big Bang. It then suggests that the universe has no inception point. Tumala is stirred by this idea of disqualifying sequential periods: beginning/end, and instead speaks of an infinitely revolving rainbow in a form of light fueling the process of life. Light, color, and the negation of causality mark the artist’s desire to find the poetics of totality – that which includes the non-differentiation of the pedagogical fields of art and science.  Light has no source, and Tumala makes it not the material, but the work. The dichroic film then is arranged as light surrounds it, making possible the isolation and gathering of colors. He scrunches the topography of the wavelengths, and recounts Cycle 0 to 0, the eternal terrain of the cosmos, without beginning and end.