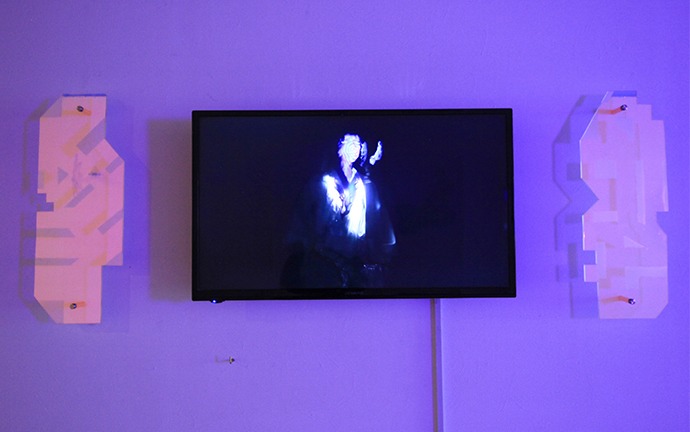 2069
To speculate the future is to take into account the conditions of the present. Derek Tumala and Jose Tong’s exhibition, 2069, visualizes a trans-disciplinary approach in speculating dynamic and local-centric futures of Philippine society. Mounted in the form of a museum cum club, the exhibition probes the grip of Western technological advances on a postcolonial society and the endeavors of local capitalism that it fuels, through forensic, speculative and investigative aesthetics. Tumala and Tong set a prospect that invokes the pained future of Gregorio Brilliantes’ Apollo Centennial, a future envisioned as discordant against the grand narratives of science and development. What Brilliantes’ character Arcadio Nagbuya sees is a vision that is worryingly close to our times, a celebration of the bold, the new, and the shiny meant to colonize, to be consumed not utilized.

Long term development aided by technological advancement in the Philippines is geared towards big business and the choleric privatization of public domains and natural resources for its sake. China’s current heavy-handed initiatives warn us: such forces are empowered. In Derek Tumala’s Coconut Crisis, a limp figure hangs over churning waters on a lifeline or perhaps as bait to some unknown behemoth in a bloodied sea. The video installation presents the chaotic imagery of territorial disputes on intangible surfaces such as water, where sovereignty always lies unstable. China’s insurgence continues to rapidly generate colonial capital in the country, flourishing within our hyper capitalist-oriented systems. In the speculative year of 2069 – a hundred years after the wondrous first step on the moon – what future can we project from a life perhaps lived as a dystopic neo-colony?

The urban condition is the stage for the human condition in spatial and ontological context. In the video of her performance as Guan Yin, we see Tong’s alter-ego A.I. Hoseki divinely illuminated with video mapping and light. A.I. Hoseki embodies the post-gender dreams of radical feminism – battling misogyny with queer futurism, a conceptual cyborg from postapocalyptic Manila. “ The cyborg is our ontology; it gives us our politics”, she states, quoting Donna Haraway in her Cyborg Manifesto (1984). After several attempts to normalize gender and its spectrum, 2069 sees an anamorphic classification of gender, or the dissolution of it.

First World future projections are often set in dystopian or utopian cities. As Bridge and Watson in Companion to the City state, “ Cities are not simply material or lived spaces – they are also spaces of the imagination and spaces of representation. How cities are envisioned has effects.”[1] Jose Tong’s works anticipate a strange concoction of urban geography concocted with cyborgian fiction and the despondent “archaic kiosks” of Brilliantes. Her Baranggay Cyborg series depicts post-city structures sprouting invasively from and within urban spaces. Architecture and its relationship to public space has not escaped the tired dichotomy of developed versus the underdeveloped. And while visions of Asian cyborg cities are usually biased towards the fetishizing of East Asian tech giants such as Japan, Singapore and Hong Kong, Brilliantes presents a contrasted future Manila that enshrines tech but imprisons itself in antiquated life.

Gazing into the future year of 2069 is gazing onwards to the dichromatic horizon of a Tropical Future of gradations and scattered complexities. Our Tropical Future that enraptures the eye; the Chinese signage of Pilipinas 菲律宾 put up and lighted by the entrance inviting us in like Brilliantes’ tall man, arms akimbo, inviting Arcadio Nagbuya and his sons to enter the door.
ND
[1] Bridge, G., & Watson, S. (Eds.). (2002). A Companion to the City. John Wiley & Sons.