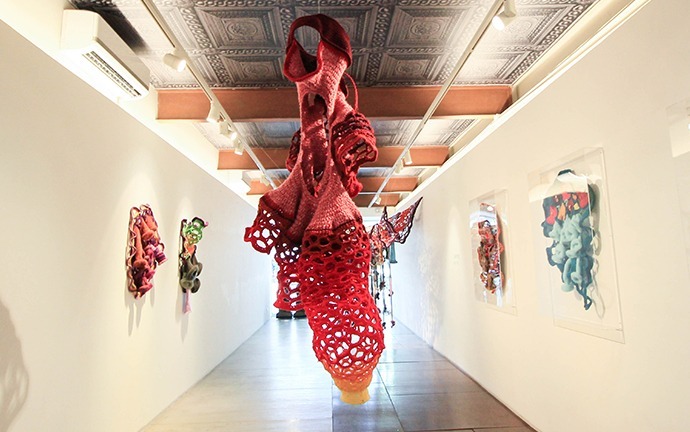 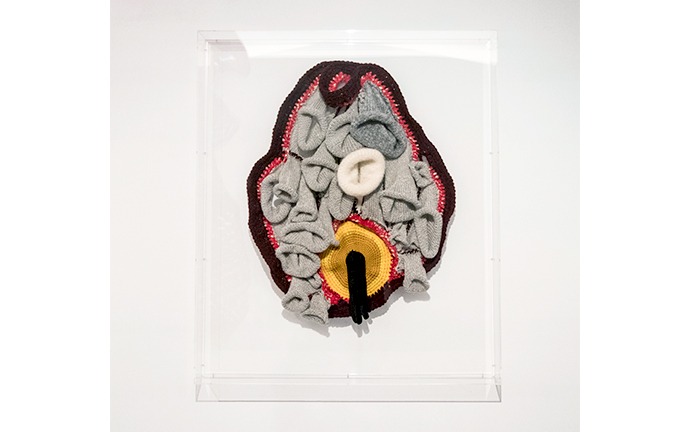 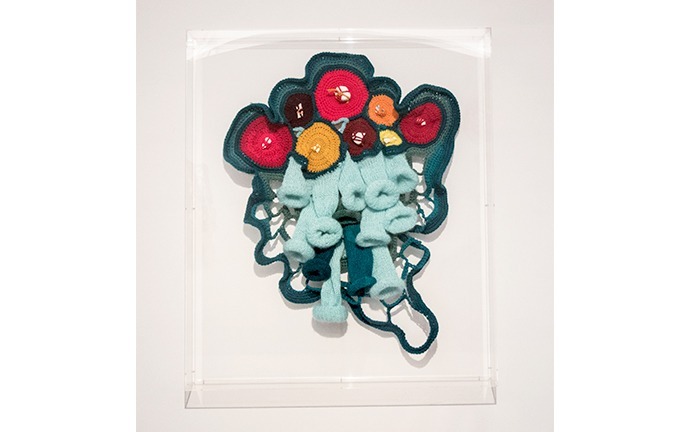 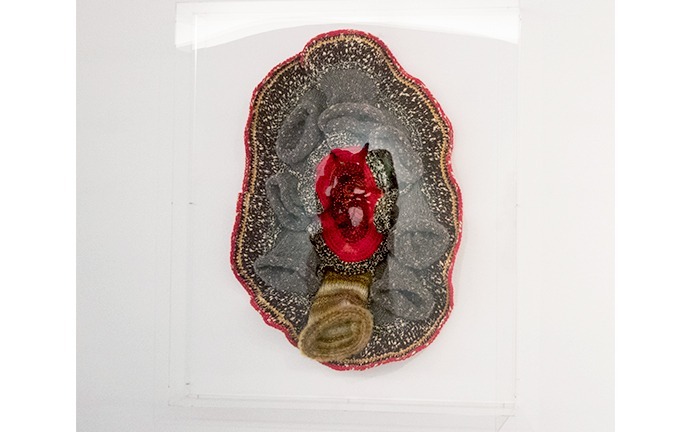 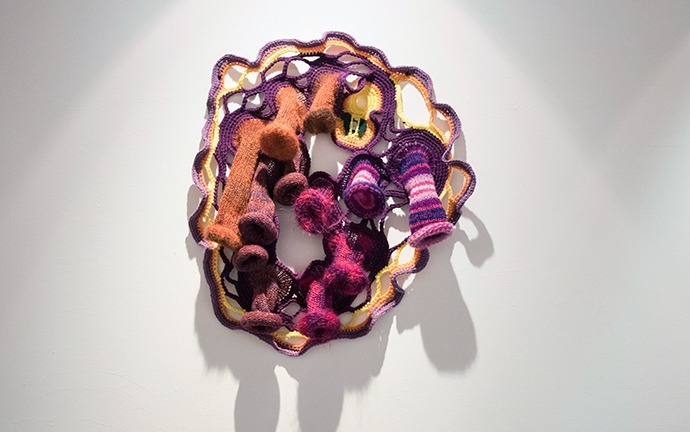 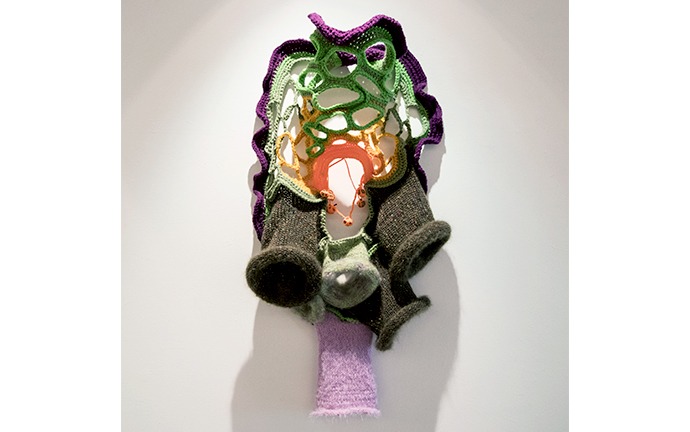 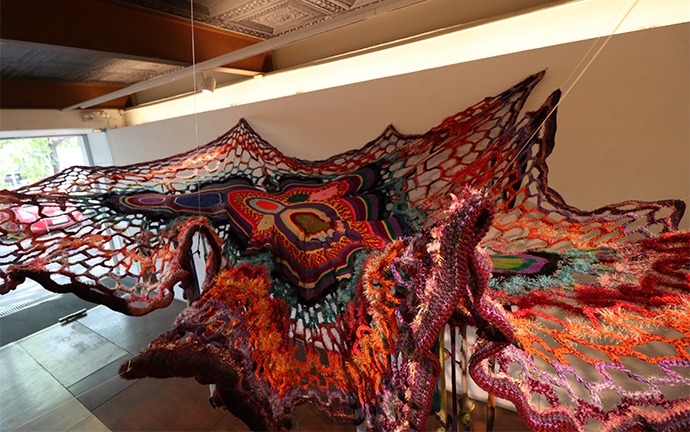 Aze Ong’s sortie into the art world did not follow a typical arc. She did not go to art school and so was not psyched up or primed, so to speak, to become an artist within the confines of art history and the ambit of the art market. Without social capital, she initially found it difficult to register a presence. Adding to this lack of access was her chosen medium: fiber. It was perceived to be not art, but craft. That the maker was a woman who did not train as an artist did not help. Finally, she had to face this persistent issue about the contemporary. Can fiber that is craft ever be contemporary? It is not even modern, some would argue.
It was not, therefore, surprising that Ong elicited a comment from an art-world observer that her art did not have a concept and therefore cannot be considered contemporary. Surely, certain notions of reflexivity are central in the knowledge system of international contemporary art. How can Ong’s art ever figure in this scene?
The mindful body is central in Ong’s gestures. The crochet work that she diligently and delicately elaborates upon to summon animate forms is supple enough to merely fall like a handkerchief from the sky or to decisively enfold the at once docile and unruly body. The substance of choice is clearly meant to be touched and felt, to be worn and to move within and through it. That the artist tends to invest in ornament to further expand the materiality of the pieces draws the viewer to the form out of curiosity and, ultimately, as an opportunity to participate in performing the textile. Visual form in the context of movement is inflected at some point in the process with sound. Ong stitches into the soft sculpture squeaking devices reminiscent of toys. All this feeds into a festive atmosphere, one that excites and activates what an artist has called “childhood urges.”
So can the notion of concept be forced into the work? How can reflexivity be imbricated in this kind of initiation?
Ong responds to these requirements of contemporary art counter-intuitively.
First, Ong keeps to the task with devotion, almost obsessively crocheting to give birth to works beyond human scale and to fill cavernous white cubes with her ever-efflorescent forms. Color is prominent. And the condition of dangling or hanging is palpable. Like flowers, they bloom. Like vines, they crawl. Cyberspace yields the website of The Institute for Figuring, and it informs us that crochet has been appropriated to simulate hyperbolic space. The account is fascinating: “In 1997 Cornell University mathematician Daina Taimina finally worked out how to make a physical model of hyperbolic space that allows us to feel, and to tactilely explore, the properties of this unique geometry. The method she used was crochet.”[1] It is explained that “one of the qualities of hyperbolic space is that as you move away from a point the space around it expands exponentially.”[2] The quest for a model to crack this spatial code led Taimina to crochet: “Taimina intuited that the essence of this construction could be implemented with knitting or crochet simply by increasing the number of stitches in each row. As you increase, the surface naturally begins to ruffle and crenellate. Taimina, who grew up in Latvia with a childhood steeped in feminine handicrafts, immediately set about making a model. At first she tried knitting – and you can indeed knit hyperbolic surfaces — but the large number of stitches on the needles quickly becomes unmanageable and Taimina realized that crochet offered the better approach.”[3] Crochet thus becomes a knowledge system, a way of sensing the world and making sense of it. Through a knitting machine, Ong is afforded more options to try formats different from the spread or the drape, as she explores the curl, the fold, or the coil, a more inward instinct of matter, a more coral-like bent.
Second, Ong explores the potential of her body to perform. Here the work acquires another life because it initiates an event in which Ong takes on the textile and choreographs a story and enacts a feeling. It is at this intersection that perhaps her body of work converses with what women artists have harnessed across the seasons to assert the dreams, perturbations, and politics of women, they who may be mothers, visionaries, weavers of future, witnesses of present, and most of all conceivers. Like the cloth of Ong, they incessantly exfoliate.
Third, Ong collects everyday things that she picks up in her sojourns and weaves them into her work. This procedure enables her to cross media, as it were, and disrupt the continuity of crochet. Her surface now becomes more textured, less prone to the capture of preconceptions about craft, utility, and commodity. For this exhibition, the signature forms of the artist are rendered hospitable to idiosyncratic objects that are integrated with the fabric. They range from acorns to hotel keys, from stones to gloves, shells to tickets. Like the yarns and the threads that are looped or filaments that are knitted through a machine, the fiber art of Ong enlivens the space because it bears a multitude of materials; and it shelters the body because it evokes the hyperbolic world. This is an exemplary convergence: the body dwells in strands of memory, taken on like habit with wistfulness and defiance.
[1] “Hyperbolic Space Crochet Models,” The Institute of Figuring, accessed 27 March 2018. http://www.theiff.org/oexhibits/oe1e.html
[2] Ibid.
[3] Ibid.