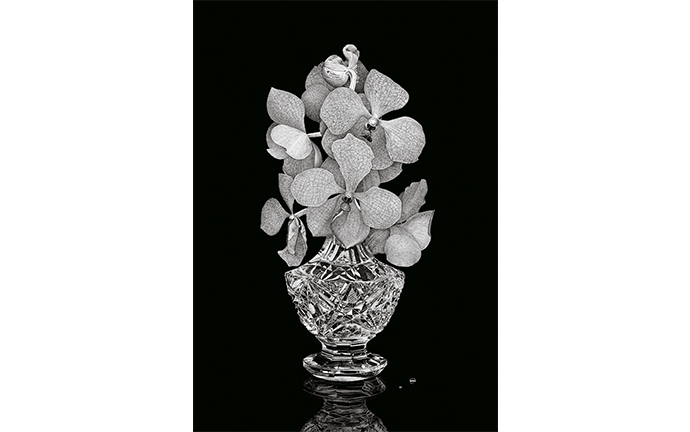 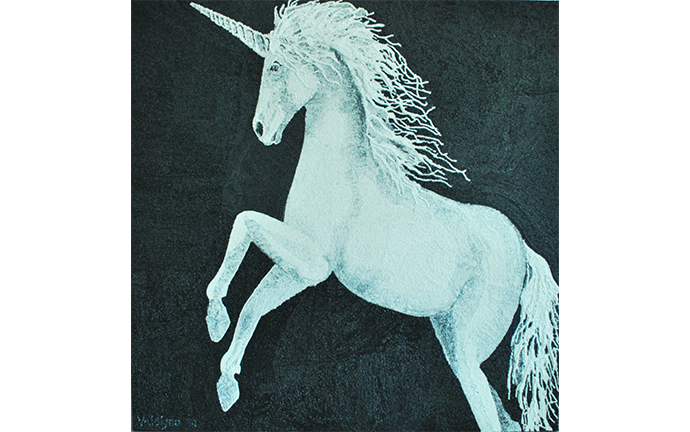 The artistic practice of Trek Valdizno is overarched by conceptual processes. In the early 90’s, the artist was part of the group exhibiting performance and installation-based works at the aftermath of “avant-garde” movements that proliferated in the 80’s. He was essentially the second generation of Filipino artists that engaged Modernity with criticality – experimenting with the formalism of aesthetics by drawing out the elements of “painting”, and isolating contexts and processes of the practitioners working together as a community at that time.

Such sensibility has never been lost to him in terms of how he engages with the material of painting and the semantics of his symbolisms. While his conclusive abstractions curb the traditional labour and gestural litter of the paintings feeding the contemporary art market, his paintings allow paint-as-material to surface. In the case of the two works shown in Magis Autumn these are made up of oil paint squeezed exactly from the tube and rolled tactfully. The individual beads placed together make the image – a meticulous job that question the dimensionality of painted surfaces.

Over the years, Valdizno’s series of oil paint pellets have fulfilled an iconography of abstracted, intuitive forms and natural landscapes. In this exhibition, he introduces a different sort of imagery – mythical horses: Pegasus and the unicorn. Given the artist’s propensity towards esoteric interests that elevate his art practice into certain brands of spirituality, the use of these particular subjects point to pursuits of nobility and purity. In these two portraits, Valdizno recounts the human condition projected through art practice as akin to the hero’s journey. In the recall of pre-Industrial lexicon, there is a return to the base necessity of striving for perfection, in the metaphysical sense, amidst the conditions imposed by contemporary society.

Amidst the onslaught of images accessible through mainstream channels, offline and online, Thilo Westermann instead provides us a conscientious way of sitting with an image. After all, the still lives draws you in by default – small-scale in the physicality of their pictorial plane and intimate by the points that make up the details.

The method on which he brings forth images is as peculiar as how we are offered to look at them. Termed as “reverse glass paintings”, these precious images are conceived through Westermann’s specific process, borne out of a sense of criticality towards an artist’s position within art historical precedents and the distribution of images in contemporary media. Alike the half-toning device in print media the artist’s motifs are composed out of an accumulation of dots, manually placed behind the visible surface by very fine and sharp inked tips. The effect is an expanded dimensionality, tense in the idea of perfection within the criteria in “realism”. In this meticulous program of image-making, the “vanitas” become an exercise in looking – at one hand distance allows an impression of hyperrealist figurations, but pulling close we are to experience the artist’s hand: a minute and persistent technique.

The subject of Westermann’s paintings alludes to the title of his series “Vanitas” – a genre of still life within the 17th century Dutch tradition. This style and movement seemed apt to the artist whose practice began with and continued in the pursuit of perfection and beauty. The implication behind the genre in the art historical sense provides us this polarity between opulence and impermanence. While “Vanitas” as a series was started by Westermann in 2002 within the duration of his studies in Nuremberg, the ideas behind the subject matter shift according to his further studies in Chinese Painting in Nanyang Academy from 2012. In the integration of Chinese-inspired motifs, questions of kitsch appropriation versus authenticity, post-colonial strategies or a return to the very tradition of still life which had always incorporated oriental objects.

What comes next? New paintings by Martin Heine

Martin Heine has now consolidated various aspects of his painting to retain its extraordinary punch and presence, with greater eloquence and articulation and address the place of subject and image in relation to its material means. The unique, complex process by which he brings the rich new works into existence allowed him to ignore this painter’s dilemma, for a far more practical question, ‘What comes next?’

Batman and Robin in Purgatory ‘occurred’ at the conclusion of a long sequence of digital discoveries, working with an Internet photo, two tense, naked, men seated in isolation, right and left of the image. It struck him that he could bring them close together within each other’s comfort zone, by halving the image vertically. to form a small Sartrean hell, a glum waiting room of dull desire.

He used the uncut image to form a background, incorporating multiple outlines of related images. The ‘masks’, across the faces were an accident of overlapping lines. Finally, he selected purgatorial colours one at a time, lurid blue, and orange pink, three contrasting ochres that overlap each other like lichen on a rotting stump.

Heine’s new colours come straight from the tube but they tend to mix and match a little on the palette. They show much more deliberation, awareness of mood. In The Dark Side of Pink, the acrylic pink of the major, strap like, anatomical curves, is dark in both senses. It was carefully mixed to be off key as possible. The transitions in the tapestry-like oil sections, eg bright red to dark purple to deep red are all courtesy of the fickle palette.

These great, serious paintings are full of laughter. Absurd, postmodern, decalcomaniac humour has transcended the painter’s dilemma with practical poetry.

(For a detailed discussion of this process, see David Bromfield Now The Hard Part: The work of Martin Heine, Perth Australia. 2011)