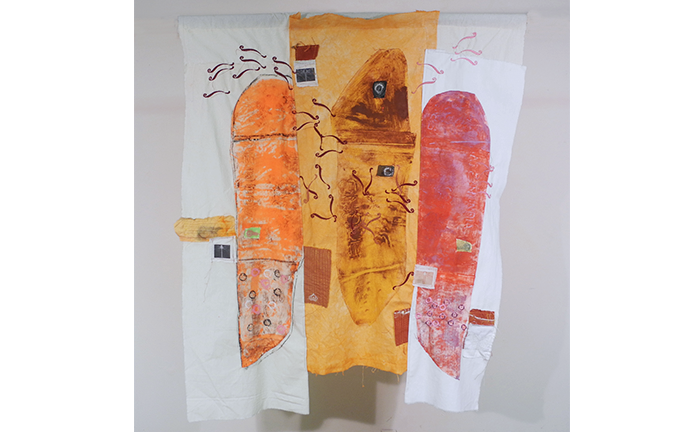 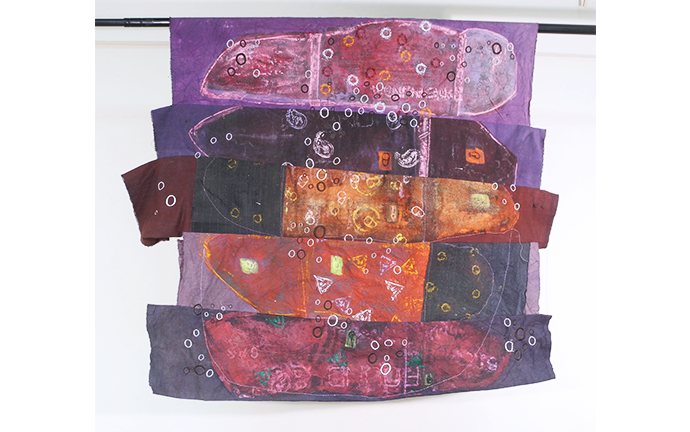 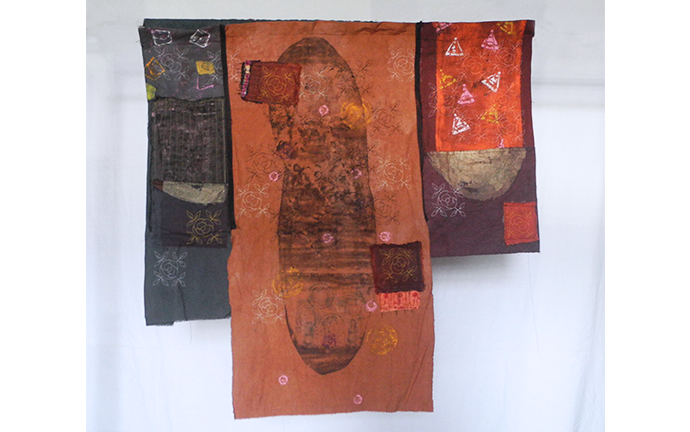 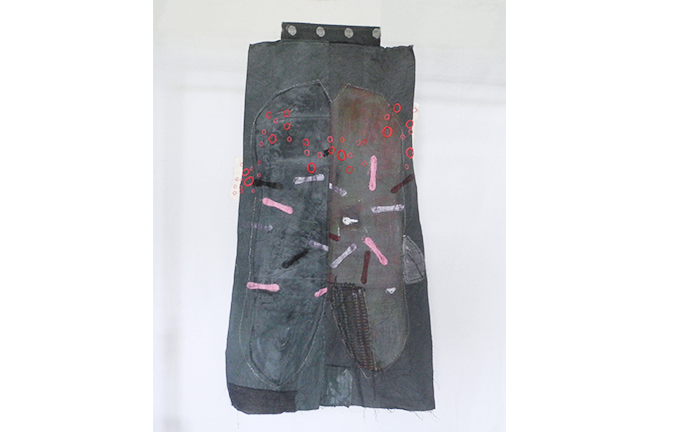 What does it mean to embody a problematic stance of both trudging on a claimed unfamiliar ground, while reifying the almost inadmissible, yet cathartic identification with ones roots? To what cause do artists invest themselves into, and at what cost? Is it a result of ones sheer hubris that owes disbelief?

For Ged Merino, the practice of art is simply a continuum. A still evolving prospect from a history of (his) learned and perfected traditions that asserts itself on all circumstances, whether it be from a privileged position or a squalid one. His (art practice) is a constant/conscious mining of resources afforded by memory, if not a means to subtly confront hegemony.

To foreground Merino’s practice is to recognize his bent towards process-oriented artmaking. Trained at the Philippine Woman’s University in the 80’s by Manuel “Boy” Rodriguez Jr., he had early on insisted on making his marks through thin application of ink or acrylic paints on textiles, which he stitched and stuffed to create protruding or relief elements onto an equally printed surface. The result was neither a painting nor a sculpture but an approximation of both. Was it Fiber Art or Soft Sculpture? For the artist, categorization was insignificant as long as he was able to pursue a singular vision – that of utilizing his abstract sensibilities while employing hard-learned printmaking techniques.

Of recent, and as a result of his conscious engagement towards contemporary strategies, the artist’s method had to shift its means and modes. To quote the author’s short note during an exhibition in New York: “ Relative to Filipino’s penchant for diligence,…Ged Merino employs unconventional means of image-making. His textile-based works were stitched prints sourced out by rubbing, hammering on objects and scratching onto any surface with texture from among the scattered detritus, walls, streets and pavements of his neighborhood in Queens. For the artist, it is a way of collecting artifacts from people’s lives, a sort of archaeological expedition where he sought to record traces of the living and thus preserving memories as links to the otherwise forgotten existences.”

This applies to his recent series of printed dragonfly wings on rags and scrap fabric in uneven, varied shapes. Except that he has made the material as subject itself, emphasizing its pliant and tactile qualities. Staged or configured as a clothesline or sampayan , these tightly knitted minutiae of inscribed worlds or universes are echoes that constitute yet another metaphor on top of another. Already, the insect’s wing as image would lend associations with vulnerability and the need to re-asses societal priorities. How apt that they managed to rest on a seeming disarray of pastiche and squalor while projecting a masterfully crafted if not seductive presence. It is as if makeshift homesteads commonly known as Barung-barong or shanties suddenly revealed their festive spirit from beneath, and amidst the chaotic burgeoning of claustrophobic, but nevertheless livable spaces. In some pieces, there are even small stitched patches that seem to hide or deny a trace or evidence of a defective state. One can easily associate Imelda’s effort to cosmeticize poverty by erecting fences over Manila’s “eyesores” during an American President’s visit in the 80’s. In fact, the image is ripe with all sorts of interpretation that parallel politicking in the still Feudal social relations. Could it be that the artist’s subconscious was operative as he creates while empathizing with the fate of his nation? Filipinos can after all find the happiest moments in the worst of times. Or, the artist is simply adept in the language of irony.

This and his recent foray into weaving discarded materials are but subliminal reparations of the looming historical incongruence, both in his native country and his adopted home. The threat as signaled by man-made and natural occurrences only alarms the progressive elements in society, artists among them in particular. Ged Merino finds himself critical of squandering and deceit in his unforgiving world that defines lavishness as a way to live. And drawn by the trend, or necessity, he laboriously transforms refuse into objects that question its legitimacy.

As an artist, Ged Merino can only scratch a pavement or ransack a bin at a time. This, while asserting a commonality we shared as humans. In respite, he shares his studio with fellow strugglers, artists of able support, kindred spirits all, who at one time or another had blissful moments at Bliss on Bliss Art Projects.