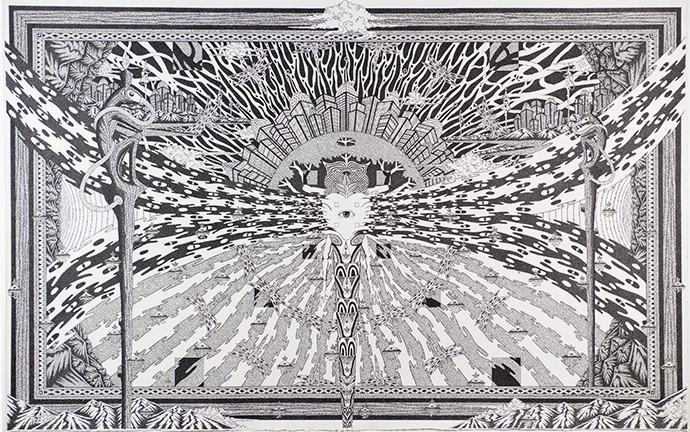 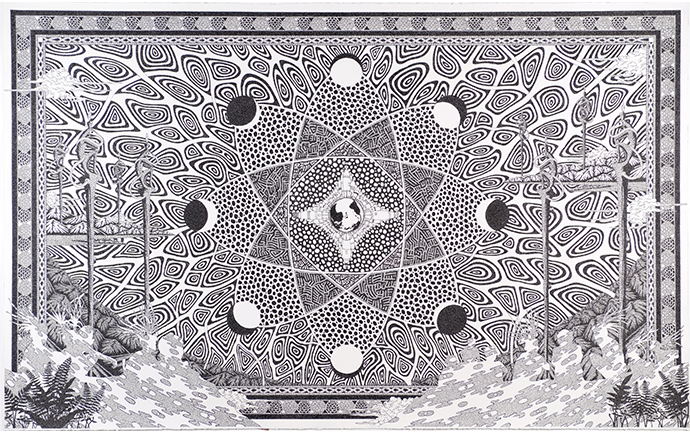 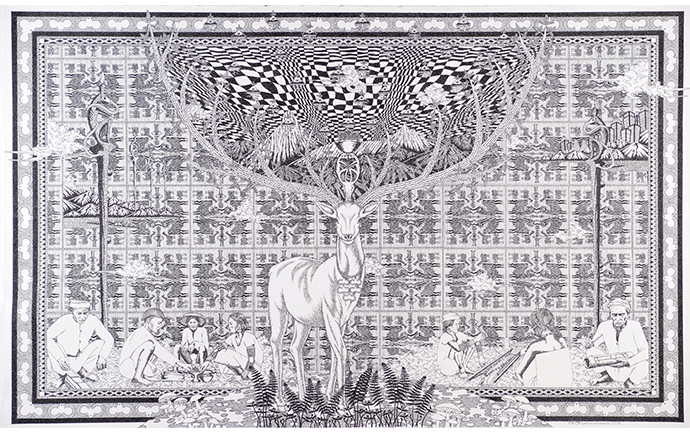 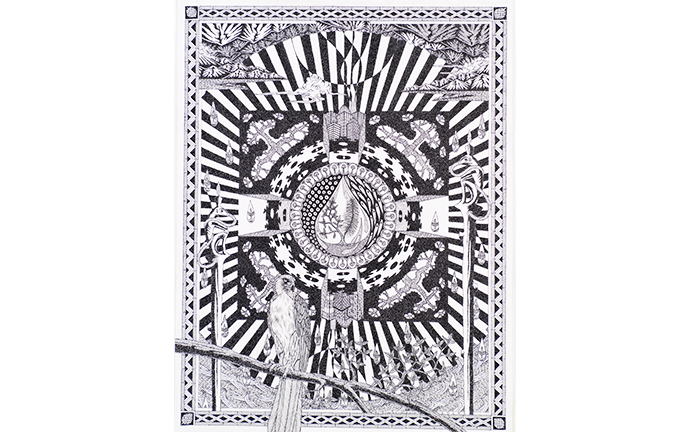 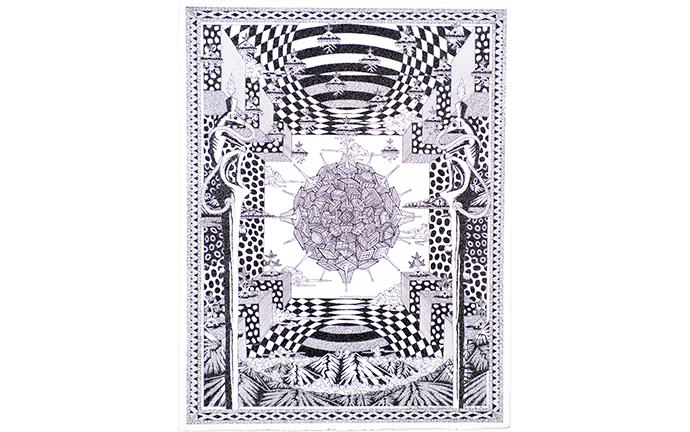 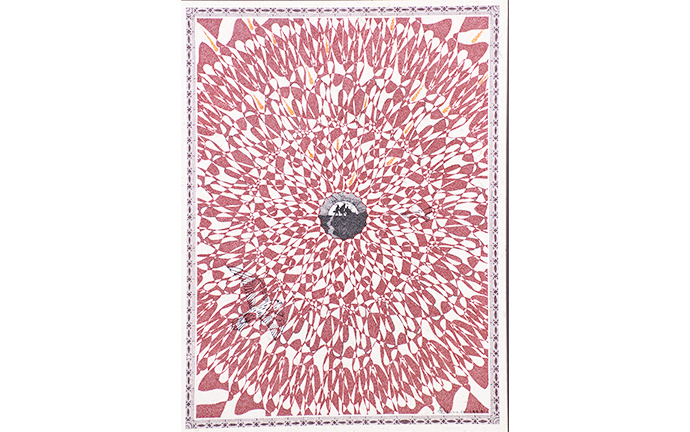 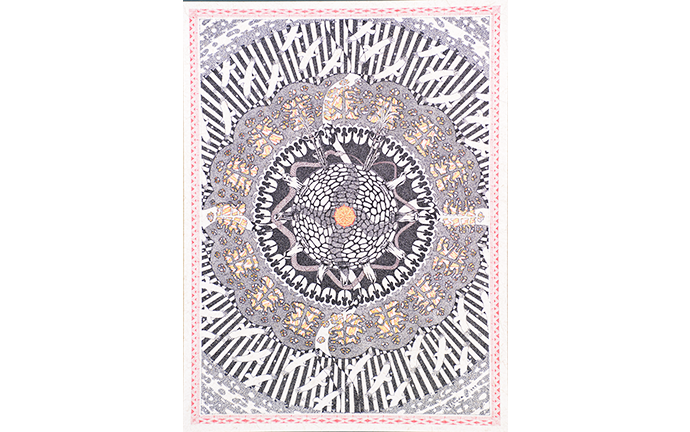 A Multitude of Labor

It is after all the fragile landscape, at once teeming and defiled. But the figuration of its details does not only refer to what we see as natural history; it alludes to how it is marked or inscribed, the vision of the process of its shaping, like how the earth is tilled in dream time by aboriginal artists in Australia, or how the intuition of the land or the logic of intuiting it is translated in another material vessel or vehicle like weaving, with fiber from flora becoming fabric that, while miniature, evokes vastness and plenty, the continuity of line’s filament, the texture of the inordinate grain of ground. Or finally how the life of the person, who makes the condition possible and hews his place in relation to this process, turns out to be a vital articulation of so-called nature, his naturaleza, or the constitution of the mindful body, the agency of art.

The artist John Frank Sabado – autodidact, of Igorot descent, and conversant in Kankana-ey — dwells on the face of the earth in varied ways.

First, the biography of the human, in this situation of the artist himself, is of essence. The writer Padmapani Perez sketches out the constellation of the artist with sensitivity to the density of his locale: “Sabado was born into the lifeworld of the Lepanto logging concession in Mankayan, Benguet. There his Ilocano parents worked to support and educate their children. As a boy he spent his days going to the river, fetching water, catching eels, hunting for mushrooms, gathering firewood. To him these chores were not work. They were no different than the mock wars that he and his playmates would wage in the forest. There were many dangers lying in wait for adventurous little boys living in a logging concession but no harm ever befell Sabado and his friends. This was deep play in the arms of Nature.” It is quite apparent at the outset that the artist’s hometown and childhood were scenes of both pillage and parturition. This might have steeled his resolve to recover its dreams, as he converses with the lasting culture of the Cordillera and communes with its myriad ancestors. This is the impulse that animates his conception of the “vanguard of the earth.” He describes them as having “legs, arms, bodies, faces, tattoos and gas masks – a contemporary rendition of the bulols as ‘eco-warriors.’ The bulols, deities of multiple guises and roles, morph into allegorical figures of a crusade for a planetary restitution in which the ethical and the aesthetic and the ecological converge to demonstrate the procedure of truth: that the “cosmic world is in disequilibrium…the world of people is in a state of distress” and this has maddened the forebears who have finally spoken and sown the seeds of healing and survival.

Second, the pattern, the motif of nature or woman, of rain and rivers, the Ifugao warrior becomes a medium through which the artist ordains a complex world and one that is prospectively “open-endedly social.” The virtue of the repetition of ornament frees the artist from the constraints of “realism” and permits him not only to explore the language of abstraction at a certain level; it also lets him bask in wonder and not be preempted by the expectations of recognition or even of meaning. Through Sabado’s perspective, there is “swarm in the aperture,” and the multitude of its aspects is breathtaking, specifically the particles of light and thing, dissolved by, or better still made vulnerable by, the exacting “fine print” and drawing caught up in a trance.

Third, in the experience of contriving patterns, a devotional obsession takes over, a consuming passion to accomplish a task that demands virtuosity, mastery, and faith in the spirit of talent and its source, manifested in the potentially infinite biro-point dots that render the silhouette of land and people, the very precarious materiality of our present universe. The labor that is invested in divining the figure of the battle-ready Kalinga woman, for instance, culminates in the aesthetic effect of sinsin, or intricacy. Lexicographers define sinsin as a certain delicate attention to the details of manner, method, or material. The common metaphor is that of weaving filaments of fiber into a mat or a textile in which the elements are densely and tidily placed close to each other and made to commingle with care and deliberation. The related term of impis is telling and is limned in the image of the circumspect folding of clothes or keeping possessions in cases. One dictionary arrays sinsin along with tupidez, densidad, inculcación. The term also shares a common semantic charge with sinop that hints at diligence, discipline, a sensitive custodianship or guardianship of things that need not be disposed. In Ilokano, sinop means discrimination.

Contemporary art and folk culture dwell on sinsin as criterion of finish, a sign of polish and completion, a concretion of labor, a testament to handiwork. The phrase pulido ang yari means the finish is well-wrought. The word fino intimates the values of fineness, delicacy of temper, sheerness. Clothing in the Spanish colonial period cherished the quality of nipis, or gossamer-like thinness, that in the beginning used to encompass any “light, thin, delicate fabrics,” regardless of their fiber and how they were woven. Sinamay, piña, and jusi belong to this trove of surfaces on which embroidery, needlework, and weaving converge to adorn it. In fact, it is said that in the Spanish lexicon, Filipinas, the name of the country, traces its provenance to “fine cloth,” so that the colony translates into a refined consummation, or a consummate refinement.

It is no surprise then that Sabado takes to textile as a referent of the world. It is not only an element of ritual, a presence from childbirth to burial; it also offers up the aesthetic of adornment that is the wellspring of ginhawa or well-being, breath itself. It is not suggested though that sinsin is synonymous with profligacy and ostentation as cued by the words maarte, borloloy, and palamuti. Sinsin is instructive if it is aligned with masining and malikhain.

This worth lavished on intricacy is leavened with light/ness. Intricacy in colonial fabric, an attribute of lowland Catholic clothing, unveils its diaphanous character and its gift of translucence as to be gleaned, for instance, in rice wafers that cluster into chandeliers in Lucban in Quezon in the Maytime festival of Pahiyas, or lanterns that deck the streets and homes on Christmas. This light/ness is reciprocated by the copious substance of ornamentation as seen in lace, basketry, jewelry, wood and metal work, furniture, decorated transport like the vinta and the jeepney, body adornment, and everyday objects in Philippine culture.

Moreover, sinsin is a symptom of a body at work, of intensive labor that is prized because it is an extension of the body; it is manual and not machine-made. It is distinguished as craft, a testimony to artisanship, an index of either domesticity or civilization. It addresses the longing for nostalgia or exoticism. It is a strategy of entitlement to subjectivity. It is contrasted with art, cultivated as a career, that is deemed singular, authentic, blessed by the creative intelligence of a professional or of a genius.

John Frank Sabado bears witness to the world — the universal ethnic and the global birthright — as it vanishes, as it replenishes, painstakingly: intricacy is, at last, intrication.