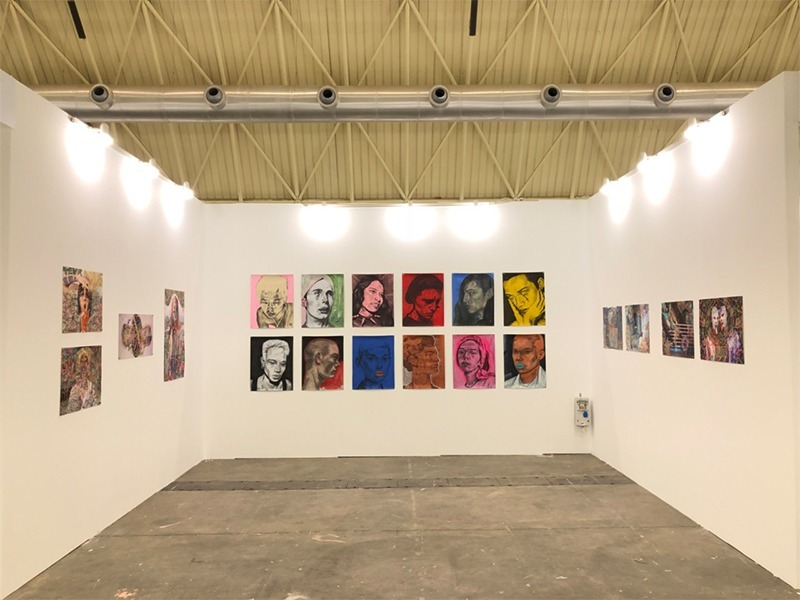 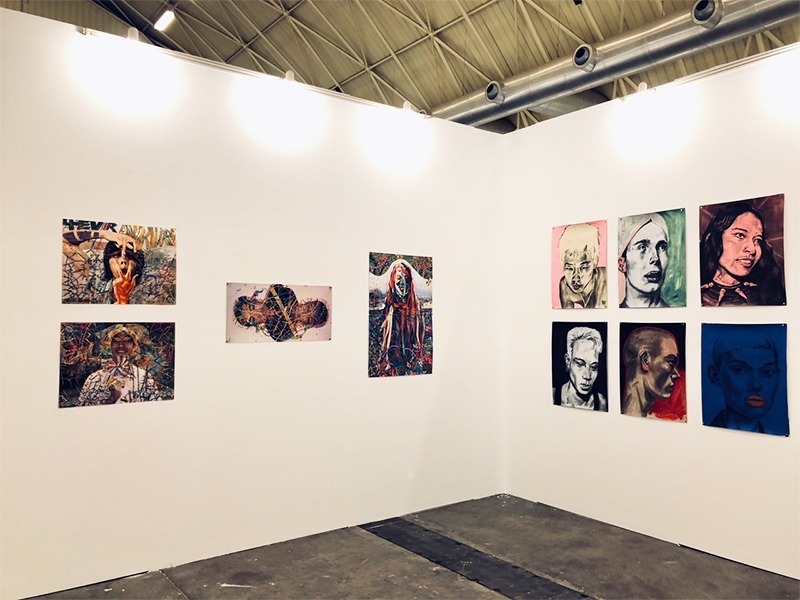 The thresholds of intimacy and violence negotiate on the brash surfaces of the sensual – no longer possessing the mien of nonchalance, rather an influx of references and imagery that preoccupy our daily experiences. As the boundaries of presence, of being one thing and another simultaneously expand beyond our person and shrink into our self, our sensualities are contaminated with interchanging gradient notions of possession (and to be possessed) as well as consumption (and to be consumed).

Superimposed on flat bold dimensions of color, Kiko Escora’s subjects occupy the space within these thresholds. Their expressions, gestures, and poses are explicitly arrested under a tacit vibe of pulsing unnerving energy. There are no abstractions, rather the manipulation of tones and the interplay of contours and flat silhouettes that situate them into the immediate. They are violently intimate in crossing the space between beholder and subject, and intimately violent in their visceral and unabashed domination of our vision.

Kiko Escora is a prolific artist, taking on different media and interests. He has done graphic design, fashion, metal sculptures, abstractions and other sorts of installation. A visionary steward of Promethean underground, he derives inspiration from music, history, design and architecture to disasters, dreams, loved ones and lovers.

Dex Fernandez
“My style is highly stylized with multiple layers of meaning. I lend a hand into associating different concepts and bring to light a third, unique message that was before unapparent. From images and materials I collage, hopefully a new endless maze-like world of possibilities take shape- staying true to my unusual personal aesthetic.”

Operating on various layers of meaning, the practice of ornamentation in the hands of Dex Fernandez turns into a play of signs that collide to construct new associative concepts, where the third meaning subsequently produced illuminating previously unseen messages. Fernandez works with found images and material that he collages together to create fantastical figurative compositions, adding further to the mix is another skin inscribed with personal design, esoteric languages, chimera, and imaginary landscapes, all of which serve to create a labyrinth of possibilities.
Embroidery, collage, drawings and painterly abstractions, with an inherent understanding of the postmodern climate in a cultural context. His interest lies on the investigation of found memories and its deconstruction through transformative appropriation.

Dex Fernandez, lives and works in Caloocan, Philippines. He is a graduate of Fine Arts from Technological University of the Philippines and has since participated in artist residencies in Vermont Studio Center in The United States (2011), Ping Pong Art Space in Taipei (2012), Lir Art Space in Indonesia (2013) and of the Asian Cultural Council in New York City (2015) , Art Center Ongoing, Tokyo Japan (2016), and Hidden South Art Project in Taitung Taiwan (2018)
Fernandez’s works ranging from murals, paintings, drawings, zine, mixed media and animations, are comprehensive compositions of pop-imagery and line drawings. He has been part of numerous local and international exhibitions, presenting his works in spaces such as UP Vargas Museum, Cultural Center of the Philippines (CCP), Museum of Design and Contemporary Arts (MCAD), Pablo Gallery, West Gallery, and Silverlens in Manila, as well as Palais de Tokyo in Paris, Primo Marella Gallery in Italy, Topaz Arts in New York, Osage Foundation, Lightbomb Contemporary and Rossi & Rossi in Hong Kong, 1am Gallery in San Francisco and Owen James Gallery in Brooklyn, NYC.
He has also participated at the first Urban Art Fair in Paris, (2016) and was one of the exhibitors in the Singapore Biennale 2016.
Fernandez is a recipient of 13 Artists Awards 2015, by Cultural Center of the Philippines.
He is known for his ongoing street art project called Garapata.