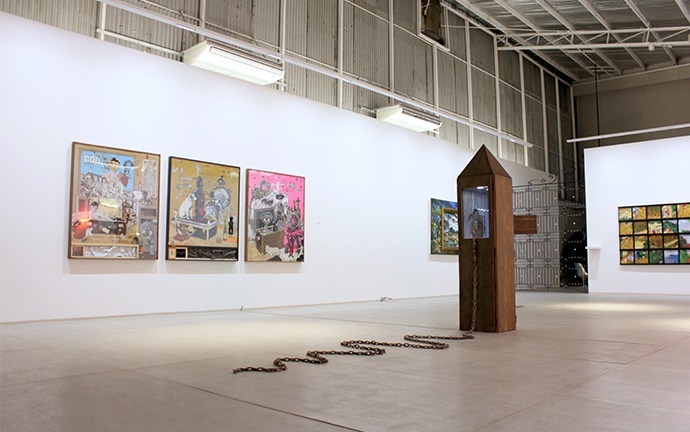 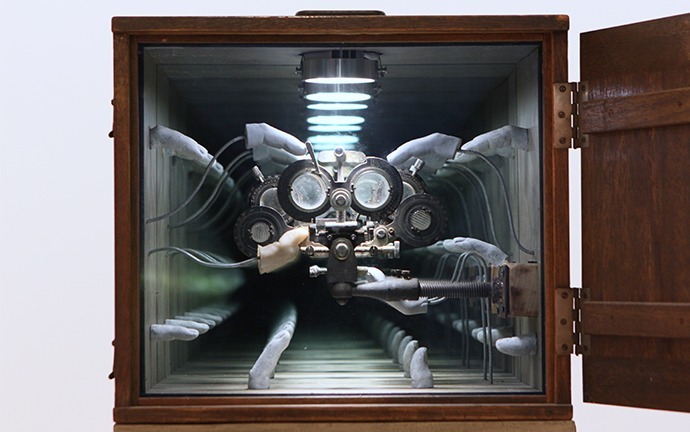 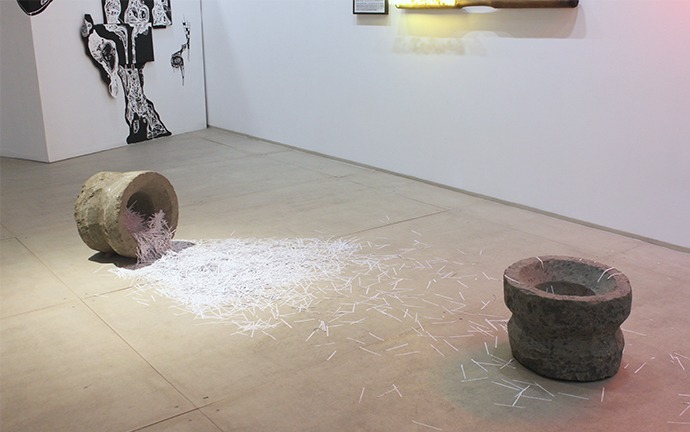 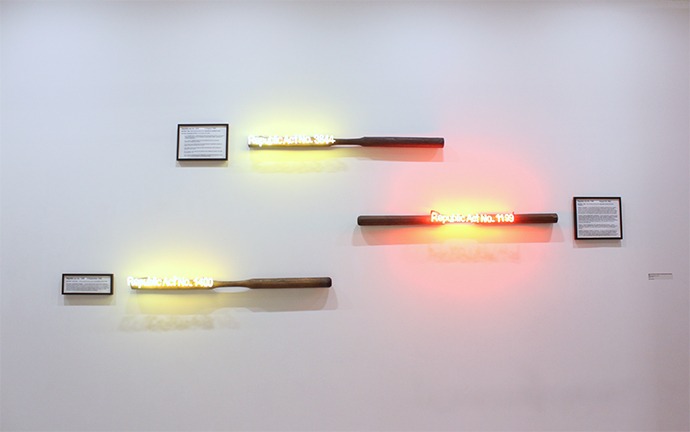 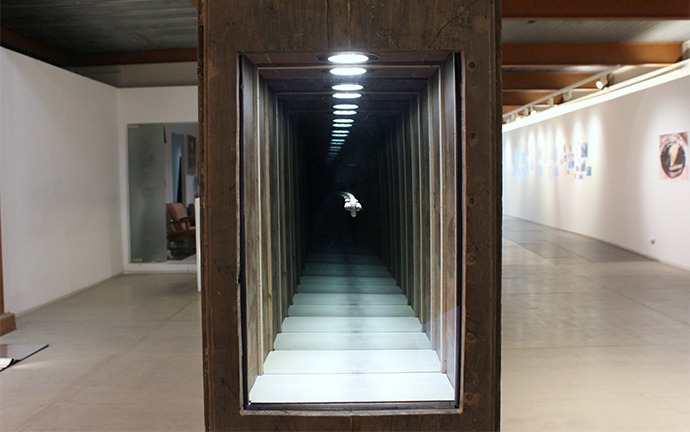 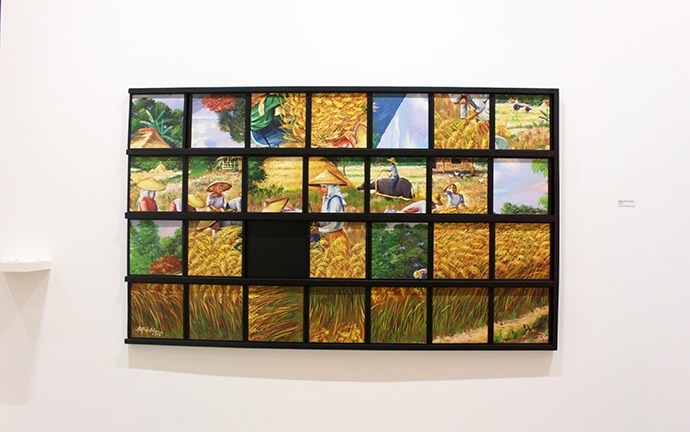 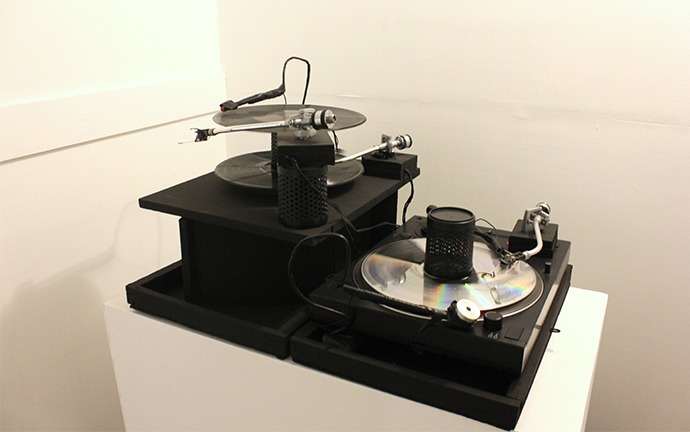 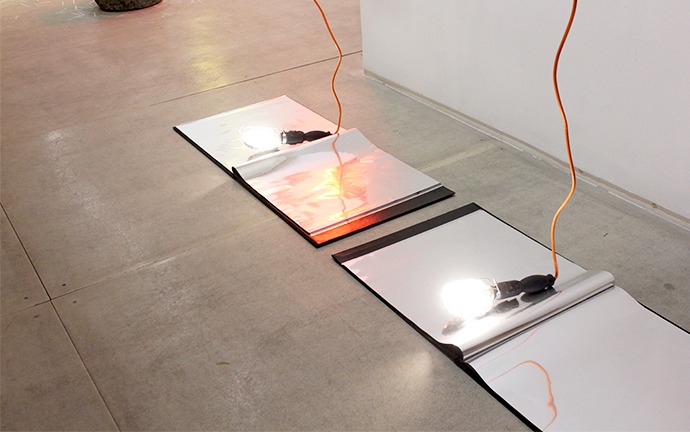 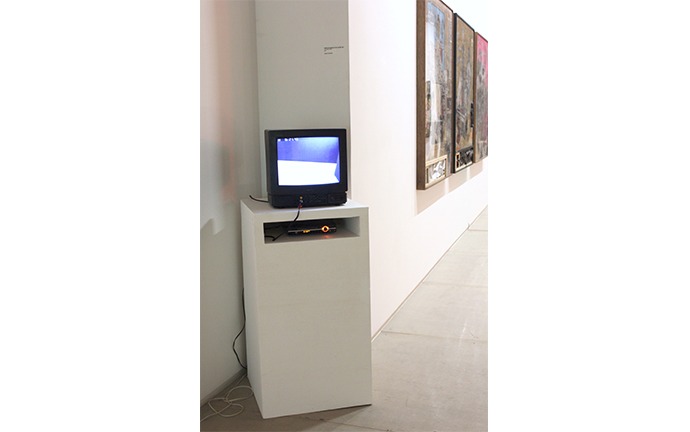 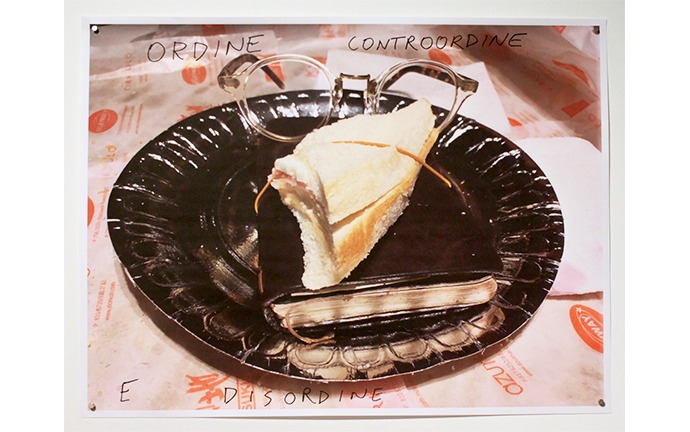 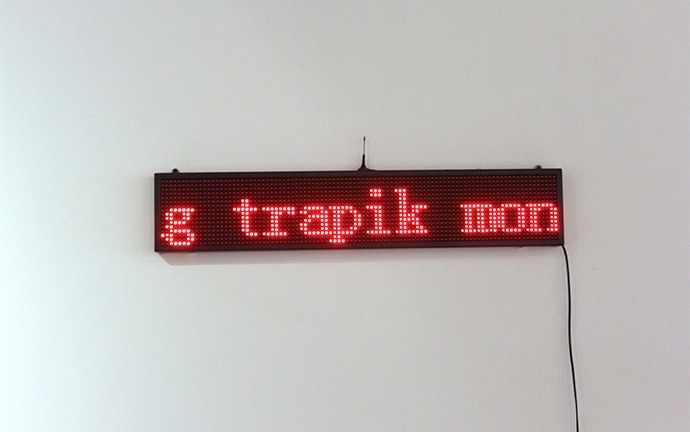 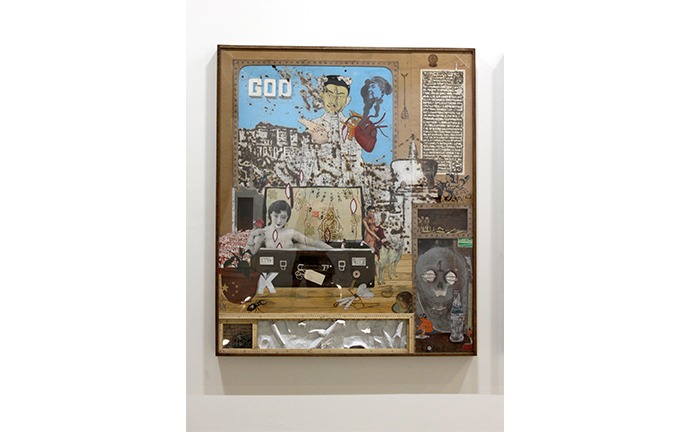 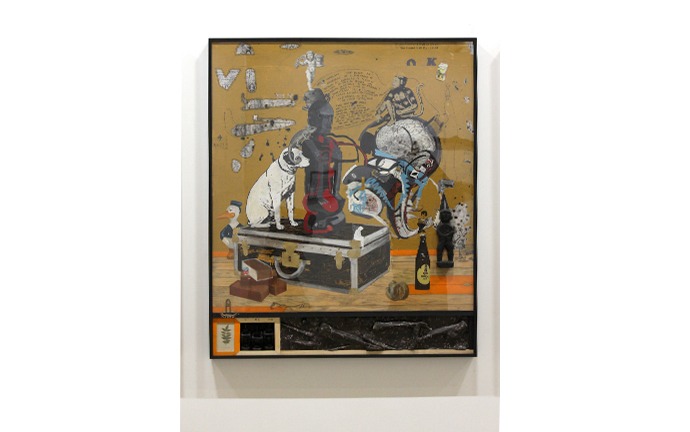 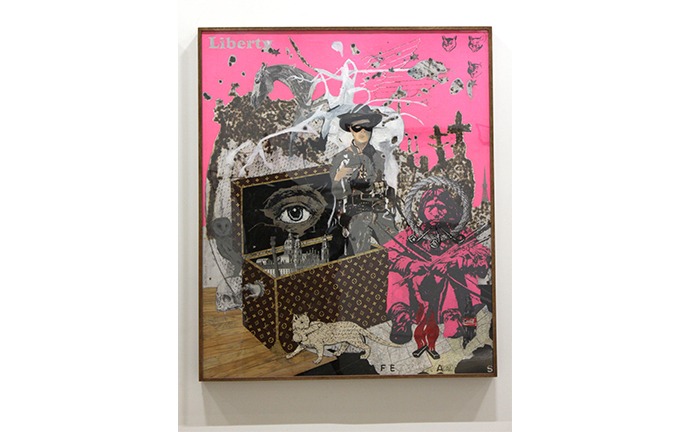 “The West exports the concept of culture all over the world.”

CONFESSION #…ON APPROPRIATION, ADAPTATION, AND

Question: What does it mean to curate one’s first simultaneous exhibition in a commercial art gallery and in a government cultural institution after producing a barter art project called Markets of Resistance?

Response: Confronting a gamut of contradictions between the practice of art versus the business of art; exchange of ideas and cultural experiences versus monetary exchange; and challenges of working with and in public and private spaces.

The Inverted Telescope exhibition is inspired by what I interpret to be transnationalist experiences of people—Filipino artists, in this context, who left their homelands to either study, visit, or live in western countries and were inspired and/or influenced by these cultures, art practices, and mindsets. The phrase is coined by the late Benedict Anderson in his introduction of The Spectre of Comparisons: Nationalism, Southeast Asia, and The World. This exhibition is dedicated to his spirit.

Modern and contemporary artists in all genres have engaged in artistic practices of appropriation, co-optation, and adaptation consciously and unconsciously, responsibly and irresponsibly since the days of Marcel Duchamp when he first exhibited ready-made pieces Bicycle Wheel (1913) and Fountain (1917). Fast forward to the late 1960s and 1970s when American Conceptual artist, John Baldessari and Roberto Chabet, the father of Conceptual Art in the Philippines, introduced and inspired their respective countries to rethink what constitutes art and (post)modernist practices.

Baldessari and Chabet have influenced generations of students and artists who are now in a phase of what art critics have called “Post Appropriation”. Each of these concepts has different connotations depending on the practitioner’s knowledge and/or perception of self, identity politics, Western and Eastern art history, multiple modernities, contemporary art practices, indigeneity, and heritage—and of course, their own objectives for producing a piece of work.

As the group exhibitions curator, I asked the six artists and one artist’s collective what the concepts/cultural practices of “appropriation”, “adaptation”, and “co-optation” mean to them with the caveat that context is of utmost importance. How do they respond when some Western critics still believe that there is no such thing as “Asian Contemporary Art”? That their art is “derivative of Western Art”? Or that Appropriation Art is passé. These debates persist. Addressing these issues today are inherent within these selected artists’ bodies of work.

One of the challenges posed to these artists was not to think so much about the definitions of the words and what they represent historically within Western art practices, but to use their organic creative processes to explore how they interpret them, their possible readings, and to create another way of exploring them in a Filipinized context. We all agreed that these terms and practices resonate in a different way in the Philippines—in society, in general and in art practices more specifically, especially when critiqued in post-colonial and post-appropriation contexts from a Filipino perspective.

This conversation with myself as a multidisciplinary artist and occasional curator about the origins of artistic modern/contemporary practices and critical debates surrounding the concepts and practices of appropriation, adaptation, and co-optation began in 1985—a pivotal year of change for me.

I had just graduated from California Institute of the Arts (CalArts)—an art school that encouraged us to nurture our concepts and the use of materials to suit them, create across disciplines, familiarize ourselves with the “isms” and “posts” from the Classics to Postmodernism, and grow a tough critical skin. A good concept, self-reflection, perseverance, contextual-ization of your work, and as few meltdowns as possible guaranteed an undergraduate student like me entrance into the cutthroat art world. The only problem was I did not know what kind of artist I wanted to be and in what arena I wanted to create in.

So I went in search of answers that over the decades I have come to live. I hopped on a plane to my immigrant parents’ homeland for five months. The Marcos era was waning—its impact ubiquitous in every sector of society. The mixture of engaging with activists, journalists, residents of Smokey Mountain, inmates on death row in Muntinlupa Prison, Cardinal Sin, and members of the diverse Manila art and cultural scene was my first conscious encounter with experiencing life through Anderson’s and Rizal’s inverted telescope—being in one’s body experiencing a series of enlightening and at the same time, discomforting upside down déjà vus that in fact, were really not.

When I returned to New York with eyes wide open, I consulted with fellow artists and former mentors if they thought I could propose exhibiting the works made by the Filipino artists I had met—Agnes Arellano, Marcel Antonio, Danny Dalena, Egay Fernandez, Renato Habulan, Julie Lluch, Jon Red, and Bogie Ruiz, to name a few. They frowned upon the idea. “Who would be interested in seeing works created by Filipinos? Did they even have a culture given their history of Spanish and American colonialism? Are there genuine movements of modern or contemporary art there?”

My disappointment with their ignorant and arrogant irresponsiveness was one that I could not fully understand until I acknowledged my own youthful art-brat responses to some of the artworks that I had seen which I, too, thought were derivative of the West or co-opted without much thought. Multiculturalism was only a faint bleep on the international art world radar. Artists of color were very much in the margins.

In retrospect, I realized, as a woman/artist/curator of color, that I was pigeon-holed and had to behave and create accordingly—from race, ethnic, gender, class, religious, and sexual preference positions—basically living and thinking from an insider/outsider perspective. I was not to go outside of the tidy, stifling identity-box or allowed to go through the western historical movements and schools of art because these practices had “all been done before”. I was not being “original” or “authentic”. My work could be interpreted as co-opting, mis/appropriating and flat out copying western practices despite the fact that I too, was a westerner perceived as a perpetual foreigner.

The irony is that this Western myopic art criticism debate can also be construed as an inverted telescope experience. The difference is—who is looking and interpreting what one sees? Who is influencing/adapting/ appropriating/co-opting whom?

Allegory of the Cave

“Socrates: Now consider what would happen if their release from the chains and the healing of their unwisdom should come about in this way. Suppose one of the prisoners was set free and forced suddenly to stand up, turn his head, and walk with eyes lifted to the light; all these movements would be painful, and he would be too dazzled to see the objects whose shadows he had been used to seeing. What do you think he would say, if someone told him what he had formerly seen was meaningless illusion, but now, being somewhat nearer to reality and turned towards more real objects, he was getting a truer view? Suppose further that he were shown the various objects being carried by and were made to say, in reply to questions, what each of them was. Would he not be perplexed and believe the objects now shown to him to be not as real as what he formerly saw?

Glaucon: Yes, not nearly so real.

Socrates: And if he were forced to look at the fire-light itself, would not his eyes ache, so that he would try to escape and turn back to the things which he could see distinctly, convinced that they really were clearer than these other objects now being shown to him? “

“Then began a new era for the Filipinos. They gradually lost their ancient traditions, their recollections–they forgot their writings, their songs, their poetry, their laws, in order to learn by heart other doctrines, which they did not understand, other ethics, other tastes, different from those inspired in their race by their climate and their way of thinking. Then there was a falling-off, they were lowered in their own eyes, they became ashamed of what was distinctively their own, in order to admire and praise what was foreign and incomprehensible: their spirit was broken and they acquiesced.”

~Jose Rizal (originally published serially in the Filipino fortnightly review “La Solidaridad”, of Madrid, running through the issues from September, 1889, to January, 1890).

There are many different ways that an artist experiences the wonderment of an inverted telescope with varying degrees of transformation. How one creates an artwork or experiences the world in which one lives is not just through what one sees near, far, upside down or backwards through a particular kind of telescope. Rather, it is the space in-between the lenses where ideas, impressions, perspectives, and practices of appropriation, adaptation, and co-optation can be translated and adapted as a crucial part of the creative process.

Such interpretations are not binary oppositional—good/bad, positive/ negative, east/west judgments. To do so is an injustice to many artists who are in control of how they create meaning in their works via the materials and technologies that they choose to use or experiment with. However, it must be noted, too, that because it is the space in-between where the artwork is “created,” the end product does not necessarily reveal this process; neither is it possible to measure the impact, if there is even a consciously conceived one, or if an epiphany is arrived at. For some artists, it is not product that is emphasized as important but process, vis-á-vis critical investigations throughout one’s lifetime. And for other artists, such concerns are irrelevant to their art practice.

The concurrent exhibitions at The Drawing Room Gallery and at The CCP are meant to dialogue with each other. The placement of the original artworks in each space is deliberate as is their arrangement in each location. In this way, their individual and collective meanings, relationship to the exhibition theme as well as to each other in each space can be experienced/read on multiple levels in the hope of addressing complex and contradictory metaphors for the works through the concept of an inverted telescope.

My question to artists is this: When you see your finished product, what do you actually see? And to you dear audience, journeys through the inverted telescope are a part of the ineffable. Yet, time and time again, we try to find meanings, explanations, as does this writer/curator/artist. I continue to resist trying to see pretty, positive, understandable, original/authentic images. The challenge that remains has to do with how to raise critical consciousness about the creative process as the creator, the apprentice, and/or the worker/s who also may play a role in the making of a piece of art yet are unacknowledged in the finished work—and as the viewer, allow all of these end products to co-exist with whatever criticism that may also arise in such problematized spaces.

The processes and acts of appropriating, adapting, and/or co-opting a movement of art, specific artists within them, and schools of thought are intrinsically subjective/objective—intentional or non intentional. The act of comparing one piece or body of artwork whose maker claims originality to what someone else may perceive as “unoriginal”, a representation, or facsimile is mediated by the creator, the viewer, and the society in which one lives, creates, and consumes in. The “spectre of comparisons” within these contexts come alive in unending entangled discourses that produce a matrix of “imagined realities”.