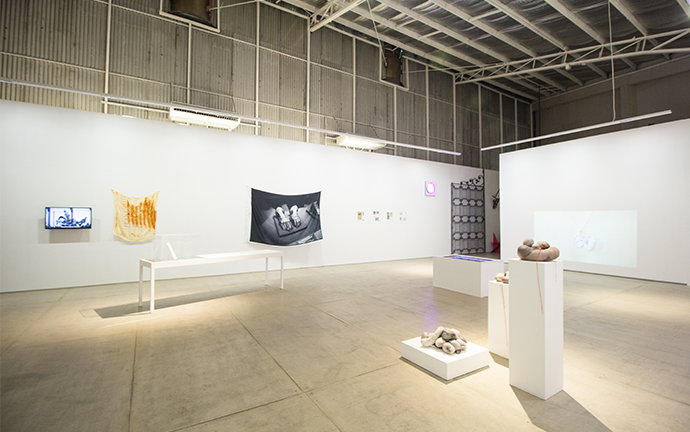 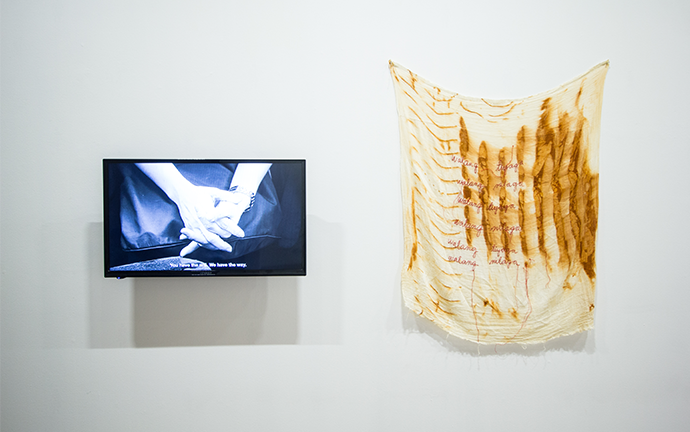 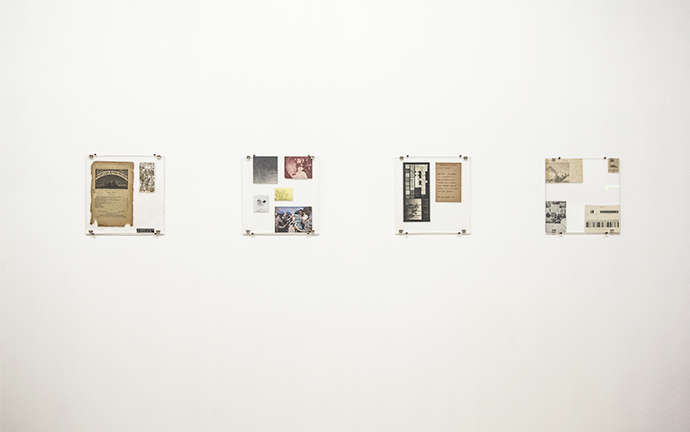 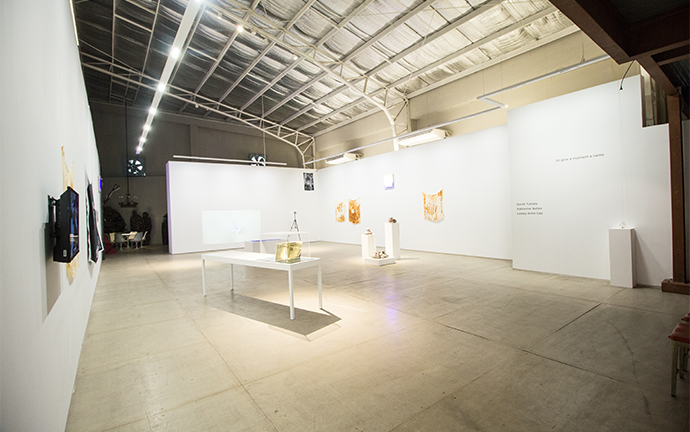 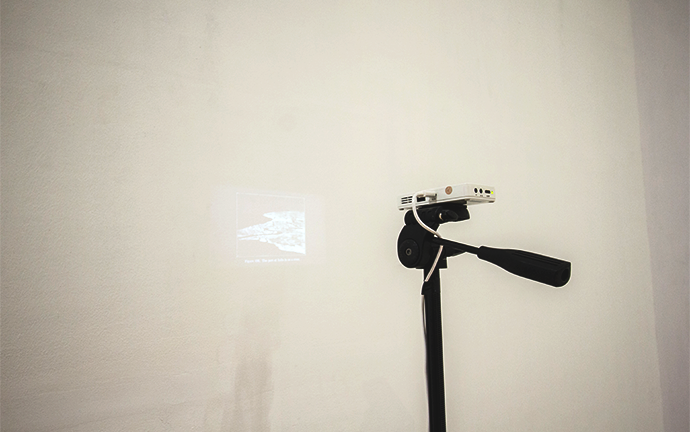 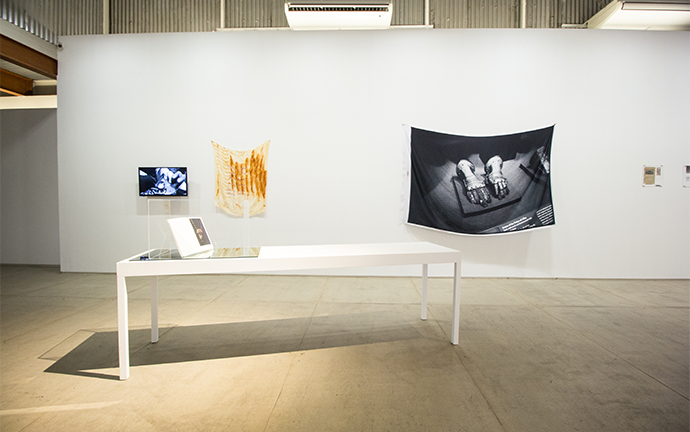 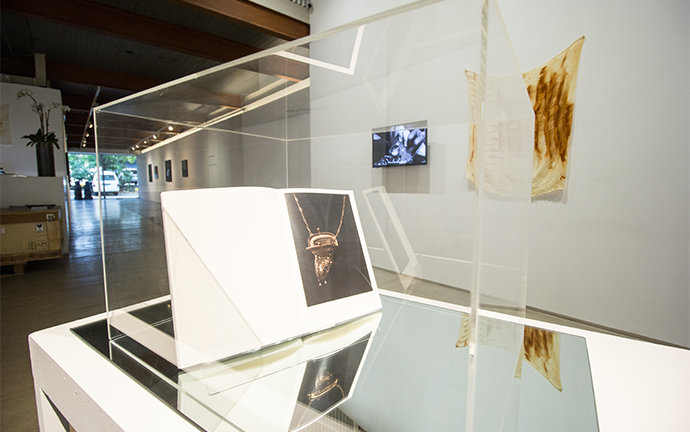 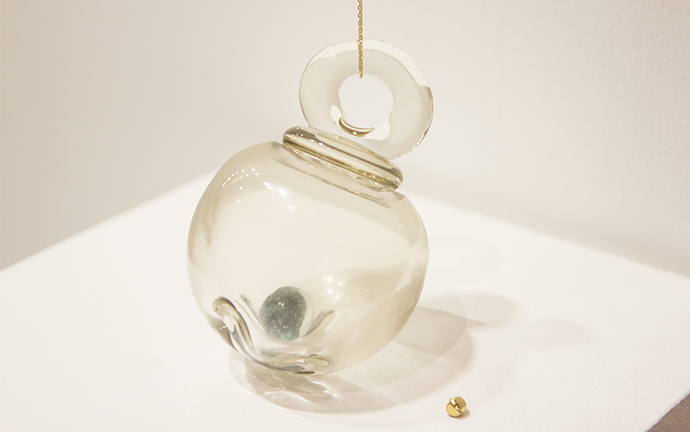 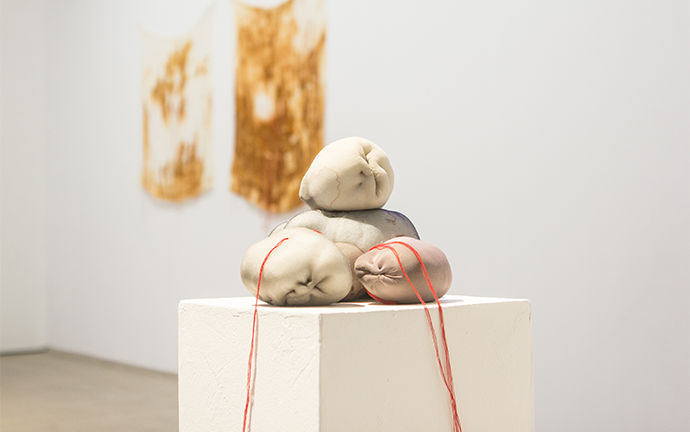 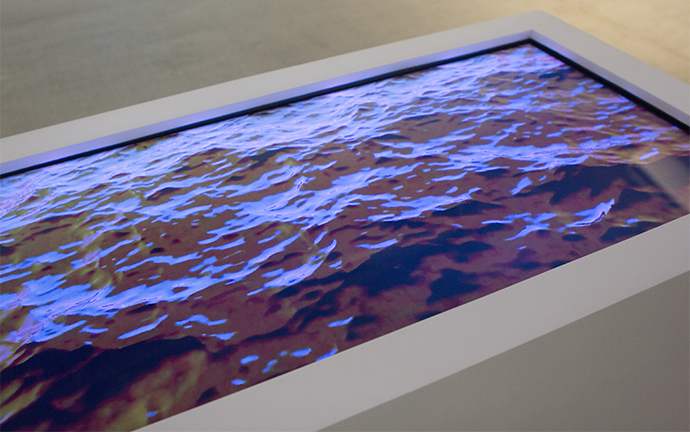 There are a hundred and two photographs of gold – as color, object, material or effect -compiled in Cao’s single-edition handmade book. Eccentric but immensely personal combinations of images from past and current information and materials are displayed in Tumala’s collages. In Nuñez video work, a collection of bodies in motion and advertising images enact a questioning of frames of mind and motivations. The provocations for the act of gathering differ for each artist: to demonstrate value, to map, to perform the materiality. From the objects that were treated as signifiers, the narratives emerge. The activities leading to the gathered equates to theorizing, maybe/hopefully even to production, of a moment. The moment as a “higher form of repetition, renewal, and reappearance, and the recognition of certain determinable relations with otherness (or the other) and with the self”.

On display are Tumala’s 3D rendering of sea waves as seen from sunrise to sunset, Cao’s commissioned recreation of a bell from glassblower Jarl Hohenthal, Nuñez’s textile works with embroidered proverbs about hard work. When art production becomes alchemy, it yields a moment. The moment that is “consituted by a choice which singles it out and separates it from a muddle or a confusion, i.e., from an initial ambiguity.” Amidst life’s constant ambiguous flowing, the attempt to disrupt it through creating tangible actions heightens our sensibility and sensitivity to continue riding its waves. Through art production, the artists were able to isolate an imagination and allow its meaning to float into consciousness. The artists’ works also demonstrate an acknowledgment of weakness or inability, as they employ extended hands of and in creation: machinery, skill, time. Integrity lies on the imagined, ceremonially passed on to us the viewers, as we witness, receive and be affected.

“The moment has its content. . . All content of moments comes from everyday life and yet every moment emerges from the everyday life in which it gathers its materials or the materials its needs.” Nuñez rust dyed pieces of cloth to illustrate how consumerism seeps into the fiber of our lifestyle. We are convinced to live the way we do through enticingly framing aspirations we think we have. Her consciousness of this trap influences her art-making and thinking about mortality, desire, relationships, and identity. Cao has been taking photographs since she was 12 and have been using them as elements of her artworks since 2017. She is interested  in how images behave after going through digitizing, editing and printing on materials that possibly affect the captured item’s volume, shine, or texture. By re-using objects in her art production, she disperses their fundamentality in various modalities as a way of eternalizing the idea of ambiguities of water and terrain. By using technology, he experiments with forms and formats in a futurist direction while at the same time grounding himself with regional literature on indigenous cosmism.

I was in the middle if reading The Theory of Moments by Henri Lefebvre when I was asked to curate this exhibition. Revisiting of rethinking the text was suddenly weaved into my daily tasks in the house and for work. Lefebvre’s explanation of what we call ‘Moment’ has been a guide for me to make sense of people’s daily actions, more so in understanding the rationale of Cao, Nuñez, and Tumala’s collection of works. It is “the attempt to achieve the total realization of a possibility,” he said. We wish to live the moment by exhausting it and fulfilling it. The accumulated efforts by the artists exhibiting their new creations inevitably then showcase such efforts – to exhuast and fulfill a moment. For Cao, it was opening up the self-contained ar tobject as an ecology of thought, Nuñez has broguht into a form the abstract idea of a world-view, Tumala attempted to capture time and topographies and their possible trajectories. What we share are parallel contemplations tied in the quest for lives that create meaning.